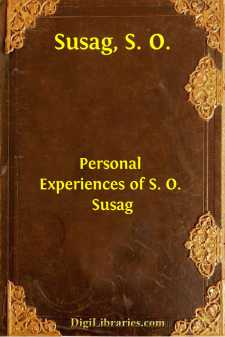 Ever since this book was first published for the author, S. O. Susag, by the Standard Printing Company, Guthrie, Oklahoma, in the year of 1948, it has been in steady demand. These many testimonies of outstanding answers to prayer have been an inspiration of faith to many people, and they will continue to be an encouragement to every earnest and honest seeker for an increase of faith in God's precious promises. "Jesus Christ the same yesterday, and to day, and for ever." Hebrews 13:8.

In contemplation of printing this fourth edition, the undersigned publisher contacted S. O. Susag's daughter, Mrs. Art Rustand (Goldie Susag), and requested further information about her late father. In February, 1976, she relayed the following notes of interest to the reader:

"My father was born in Steinkjer, Norway, on March 28, 1862. He came from Norway to Minneapolis, Minnesota, and was in the store business for a while. In 1892, they moved to Paynesville, Minnesota, where they engaged in farming. After they moved to the farm he was converted, and in the year of 1895 he received his call from God to the ministry of the Word. He traveled as a missionary to the Scandinavian countries for many years. He also served as pastor in Grand Forks, N. D., and as an evangelist for years. In fact, at the time of his death, which was in Culbertson, Montana, when he was 90 years of age, he was traveling around holding services. His death was attributed to his age. He was up and around until three days prior to his passing. At the time of his death he made his home with his second wife in Medicine Lake, Montana. He died on July 8, 1952, and was buried beside his first wife (my mother) at the Church of God Cemetery near Wendell, Minnesota."

"And I will bring the blind by a way that they knew not; I will lead them in paths that they have not known; I will make darkness light before them, and crooked things straight. These things will I do unto them and not forsake them." (Isa. 42:16). This Scripture seems to fit into my life's experiences.

I was born in Norway. My parents were Lutherans. When I was two years of age an incident occurred which I have never forgotten. It was this: My Grandmother on my mother's side—a very godly woman—used to visit us at least once a month.

On the occasion to which I refer, as she was about to leave us, Grandmother said to my mother, "Ellen, I would like to speak to you 'under four eyes' (that is to say, privately). Does the child understand anything that is said?" Her reply was, "No, he doesn't understand." Then Grandmother proceeded to say, "I have been wondering what would be the best way to pass out of this world without being a trouble to anyone, and the Lord has shown me that someday I shall lie down as usual to go to sleep and wake up in glory and this may be the last time that I shall see you; so now, my daughter, I feel constrained to urge you to seek the Lord." Again she said, "I am sure the Lord has shown me that I shall go that way." Four years later she went to glory just that way.

My parents had not given their hearts to God, yet they taught us to live right. The only religious services we ever attended were those held once a month in a country chapel. Other Sundays we would sing together in our home and father would read a sermon to us out of a book.

We would then repeat the Lord's prayer and sing another song.

One afternoon, when I was two and a half years old, a number of we children were invited to a neighbor's for lunch and play....