Personal Experience of a Physician 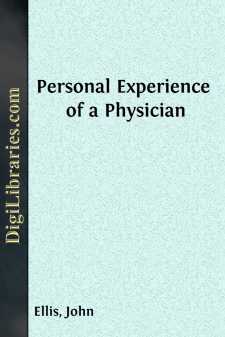 We all admit that every one who attempts to act as a physician, should strive to qualify himself, or herself, for the work by obtaining the best education which our medical schools afford; for to physicians are intrusted, not simply the property or money, but the very lives of their fellow-citizens. As the responsibility is great, so the duty of preparing one's self before commencing practice, and of keeping fully abreast of all new and valuable discoveries in the art of healing, is equally great. A physician should not be led blindly by his teachers and prominent medical writers, and so strongly confirm himself in the theories and views which they proclaim that he cannot, without prejudice, examine new views and theories with due care. It has been said that when Harvey discovered the true course of the circulation of the blood, there was not a single professor in the medical colleges of England over fifty years of age, who ever believed "the heresy," as his discovery was called. However this may have been, it is certain that professors and prominent medical writers are not always the first to see and recognize the truth, even when it is clearly presented to their notice.

A native of western Massachusetts, I studied medicine with an intelligent and worthy physician in my native town, and attended two and one-half courses of medical lectures at the Berkshire Medical College, at Pittsfield, Mass., and graduated in 1841; and during the following winter I attended the Medical College at Albany, N. Y., devoting a large portion of my time to dissecting. After finishing at Albany, I visited various places in western and central Massachusetts, and operated on eyes for strabismus or cross-eyes,—an operation which had then been recently introduced for that deformity; after which I settled at Chesterfield (Mass.), and commenced practicing medicine, where I remained about one year.

One day I visited Northampton, and, calling on a physician with whom I was acquainted, I found upon his table a homoeopathic book. "Why," I exclaimed with astonishment, "you are not studying homoeopathy, are you?" "Yes," he replied, "I am studying it, and trying the remedies cautiously;" and he went on to describe cases which he had treated satisfactorily by the use of the remedies, and among them a case of pleurisy and one of intermittent fever, and he wound up by saying: "Now, if you will go down the street to a book-store and purchase 'Hull's Jahr,' in two volumes, I will give you half a dozen homoeopathic remedies, and you can try them for yourself."

Here was a dilemma. Never until that hour had I ever heard homoeopathy spoken of, by either a medical professor or one of my professional brethren, except with contempt and ridicule. "But," I said to myself, "if there is any truth in homoeopathy I ought to know it, and I cannot treat this physician's testimony with contempt; and it is a duty which I owe to my fellow-men, and especially to my patients, to investigate the new system carefully." I immediately went and purchased the books, and he give me six bottles of medicine, and I took them back with me to Chesterfield....