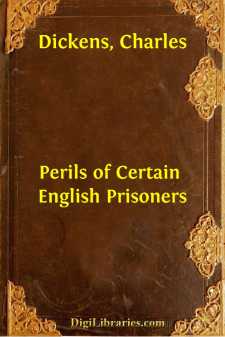 It was in the year of our Lord one thousand seven hundred and forty-four, that I, Gill Davis to command, His Mark, having then the honour to be a private in the Royal Marines, stood a-leaning over the bulwarks of the armed sloop Christopher Columbus, in the South American waters off the Mosquito shore.

My lady remarks to me, before I go any further, that there is no such christian-name as Gill, and that her confident opinion is, that the name given to me in the baptism wherein I was made, &c., was Gilbert.  She is certain to be right, but I never heard of it.  I was a foundling child, picked up somewhere or another, and I always understood my christian-name to be Gill.  It is true that I was called Gills when employed at Snorridge Bottom betwixt Chatham and Maidstone to frighten birds; but that had nothing to do with the Baptism wherein I was made, &c., and wherein a number of things were promised for me by somebody, who let me alone ever afterwards as to performing any of them, and who, I consider, must have been the Beadle.  Such name of Gills was entirely owing to my cheeks, or gills, which at that time of my life were of a raspy description.

My lady stops me again, before I go any further, by laughing exactly in her old way and waving the feather of her pen at me.  That action on her part, calls to my mind as I look at her hand with the rings on it—Well!  I won’t!  To be sure it will come in, in its own place.  But it’s always strange to me, noticing the quiet hand, and noticing it (as I have done, you know, so many times) a-fondling children and grandchildren asleep, to think that when blood and honour were up—there!  I won’t! not at present!—Scratch it out.

She won’t scratch it out, and quite honourable; because we have made an understanding that everything is to be taken down, and that nothing that is once taken down shall be scratched out.  I have the great misfortune not to be able to read and write, and I am speaking my true and faithful account of those Adventures, and my lady is writing it, word for word.

I say, there I was, a-leaning over the bulwarks of the sloop Christopher Columbus in the South American waters off the Mosquito shore: a subject of his Gracious Majesty King George of England, and a private in the Royal Marines.

In those climates, you don’t want to do much.  I was doing nothing.  I was thinking of the shepherd (my father, I wonder?) on the hillsides by Snorridge Bottom, with a long staff, and with a rough white coat in all weathers all the year round, who used to let me lie in a corner of his hut by night, and who used to let me go about with him and his sheep by day when I could get nothing else to do, and who used to give me so little of his victuals and so much of his staff, that I ran away from him—which was what he wanted all along, I expect—to be knocked about the world in preference to Snorridge Bottom.  I had been knocked about the world for nine-and-twenty years in all, when I stood looking along those bright blue South American Waters.  Looking after the shepherd, I may say.  Watching him in a half-waking dream, with my eyes half-shut, as he, and his flock of sheep, and his two dogs, seemed to move away from the ship’s side, far away over the blue water, and go right down into the sky....