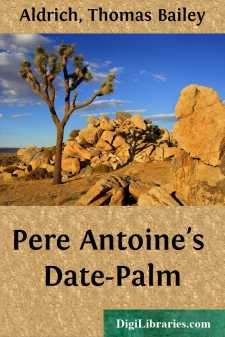 Near the Levée, and not far from the old French Cathedral in the Place d'Armes, at New Orleans, stands a fine date-palm, thirty feet in height, spreading its broad leaves in the alien air as hardily as if its sinuous roots were sucking strength from their native earth.

Sir Charles Lyell, in his Second Visit to the United States, mentions this exotic: "The tree is seventy or eighty years old; for Père Antoine, a Roman Catholic priest, who died about twenty years ago, told Mr. Bringier that he planted it himself, when he was young. In his will he provided that they who succeeded to this lot of ground should forfeit it if they cut down the palm."

Wishing to learn something of Père Antoine's history, Sir Charles Lyell made inquiries among the ancient créole inhabitants of the faubourg. That the old priest, in his last days, became very much emaciated, that he walked about the streets like a mummy, that he gradually dried up, and finally blew away, was the meagre and unsatisfactory result of the tourist's investigations. This is all that is generally told of Père Antoine. In the summer of 1861, while New Orleans was yet occupied by the Confederate forces, I met at Alexandria, in Virginia, a lady from Louisiana—Miss Blondeau by name—who gave me the substance of the following legend touching Père Antoine and his wonderful date-palm. If it should appear tame to the reader, it will be because I am not habited in a black ribbed-silk dress, with a strip of point-lace around my throat, like Miss Blondeau; it will be because I lack her eyes and lips and Southern music to tell it with.

When Père Antoine was a very young man, he had a friend whom he loved as he loved his life. Emile Jardin returned his passion, and the two, on account of their friendship, became the marvel of the city where they dwelt. One was never seen without the other; for they studied, walked, ate, and slept together.

Thus began Miss Blondeau, with the air of Fiammetta telling her prettiest story to the Florentines in the garden of Boccaccio.

Antoine and Emile were preparing to enter the Church; indeed, they had taken the preliminary steps, when a circumstance occurred which changed the color of their lives. A foreign lady, from some nameless island in the Pacific, had a few months before moved into their neighborhood. The lady died suddenly, leaving a girl of sixteen or seventeen, entirely friendless and unprovided for. The young men had been kind to the woman during her illness, and at her death—melting with pity at the forlorn situation of Anglice, the daughter—swore between themselves to love and watch over her as if she were their sister.

Now Anglice had a wild, strange beauty that made other women seem tame beside her; and in the course of time the young men found themselves regarding their ward not so much like brothers as at first. In brief, they found themselves in love with her.

They struggled with their hopeless passion month after month, neither betraying his secret to the other; for the austere orders which they were about to assume precluded the idea of love and marriage. Until then they had dwelt in the calm air of religious meditations, unmoved except by that pious fervor which in other ages taught men to brave the tortures of the rack and to smile amid the flames....