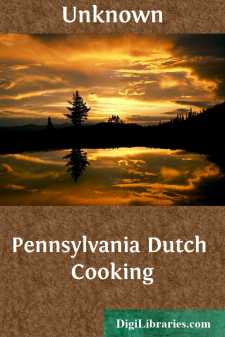 In 1683 the Plain Sects began to arrive in William Penn’s Colony seeking a land of peace and plenty. They were a mixed people; Moravians from Bohemia and Moravia, Mennonites from Switzerland and Holland, the Amish, the Dunkards, the Schwenkfelds, and the French Huguenots. After the lean years of clearing the land and developing their farms they established the peace and plenty they sought. These German-speaking people were originally called the Pennsylvania Deutsch but time and custom have caused them to be known to us as the Pennsylvania Dutch.

The Pennsylvania Dutch are a hard working people and as they say, “Them that works hard, eats hearty.” The blending of recipes from their many home lands and the ingredients available in their new land produced tasty dishes that have been handed down from mother to daughter for generations. Their cooking was truly a folk art requiring much intuitive knowledge, for recipes contained measurements such as “flour to stiffen,” “butter the size of a walnut,” and “large as an apple.” Many of the recipes have been made more exact and standardized providing us with a regional cookery we can all enjoy.

Soups are a traditional part of Pennsylvania Dutch cooking and the Dutch housewife can apparently make soup out of anything. If she has only milk and flour she can still make rivel soup. However, most of their soups are sturdier dishes, hearty enough to serve as the major portion of the evening meal. One of the favorite summer soups in the Pennsylvania Dutch country is Chicken Corn Soup. Few Sunday School picnic suppers would be considered complete without gallons of this hearty soup.

Many of the Pennsylvania Dutch foods are a part of their folklore. No Shrove Tuesday would be complete without raised doughnuts called “fastnachts.” One of the many folk tales traces this custom back to the burnt offerings made by their old country ancestors to the goddess of spring. With the coming of Christianity the custom became associated with the Easter season and “fastnachts” are eaten on Shrove Tuesday to insure living to next Shrove Tuesday. Young dandelion greens are eaten on Maundy Thursday in order to remain well throughout the year.

The Christmas season is one of the busiest times in the Pennsylvania Dutch kitchen. For weeks before Christmas the house is filled with the smell of almond cookies, anise cookies, sandtarts, Belsnickle Christmas cookies, walnut kisses, pfeffernusse, and other traditional cookies. Not just a few of one kind but dozens and dozens of many kinds of cookies must be made. There must be plenty for the enjoyment of the family and many holiday visitors.