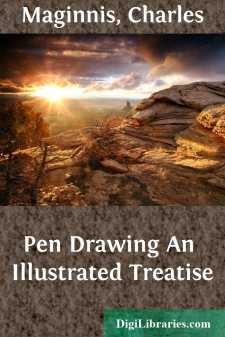 Art, with its finite means, cannot hope to record the infinite variety and complexity of Nature, and so contents itself with a partial statement, addressing this to the imagination for the full and perfect meaning. This inadequation, and the artificial adjustments which it involves, are tolerated by right of what is known as artistic convention; and as each art has its own particular limitations, so each has its own particular conventions. Sculpture reproduces the forms of Nature, but discards the color without any shock to our ideas of verity; Painting gives us the color, but not the third dimension, and we are satisfied; and Architecture is purely conventional, since it does not even aim at the imitation of natural form.

The Conventions of Line Drawing Of the kindred arts which group themselves under the head of Painting, none is based on such broad conventions as that with which we are immediately concerned—the art of Pen Drawing. In this medium, Nature's variety of color, when not positively ignored, is suggested by means of sharp black lines, of varying thickness, placed more or less closely together upon white paper; while natural form depends primarily for its representation upon arbitrary boundary lines. There is, of course, no authority in Nature for a positive outline: we see objects only by the difference in color of the other objects behind and around them. The technical capacity of the pen and ink medium, however, does not provide a value corresponding to every natural one, so that a broad interpretation has to be adopted which eliminates the less positive values; and, that form may not likewise be sacrificed, the outline becomes necessary, that light objects may stand relieved against light. This outline is the most characteristic, as it is the most indispensable, of the conventions of line drawing. To seek to abolish it only involves a resort to expedients no less artificial, and the results of all such attempts, dependent as they necessarily are upon elaboration of color, and a general indirectness of method, lack some of the best characteristics of pen drawing. More frequently, however, an elaborate color-scheme is merely a straining at the technical limitations of the pen in an effort to render the greatest possible number of values.

It may be worth while to inquire whether excellence in pen drawing consists in thus dispensing with its recognized conventions, or in otherwise taxing the technical resources of the instrument. This involves the question of Style,—of what characteristic pen methods are,—a question which we will briefly consider.

What Constituted "Style" It is a recognized principle that every medium of art expression should be treated with due regard to its nature and properties. The sculptor varies his technique according as he works in wood, granite, or marble; the painter handles his water-color in quite another manner than that he would employ on an oil-painting of the same subject; and the architect, with the subtle sense of the craftsman, carries this principle to such a fine issue as to impart an individual expression even to particular woods....