Peeps at Many Lands: Japan 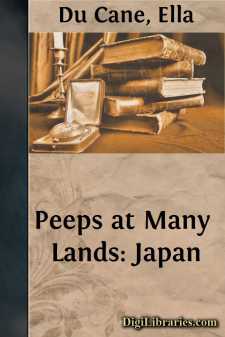 CHAPTER I THE LAND OF THE RISING SUN

Far away from our land, on the other side of the world, lies a group of islands which form the kingdom of Japan. The word "Japan" means the "Land of the Rising Sun," and it is certainly a good name for a country of the Far East, the land of sunrise.

The flag of Japan, too, is painted with a rising sun which sheds its beams on every hand, and this flag is now for ever famous, so great and wonderful have been the victories in which it has been borne triumphant over Russian arms.

The rise of Japan in becoming one of the Great Powers of the world has been very sudden and wonderful. Fifty years ago Japan lay hidden from the world; she forbade strangers to visit the country, and very little was known of her people and her customs.

Her navy then consisted of a few wooden junks; to-day she has a fleet of splendid ironclads, handled by men who know their duties as well as English seamen. Her army consisted of troops armed with two swords and carrying bows and arrows; to-day her troops are the admiration of the world, armed with the most modern weapons, and, as foes, to be dreaded by the most powerful nations.

Fifty years ago Japan was in the purely feudal stage. Her great native Princes were called Daimios. Each had a strong castle and a private army of his own. There were ceaseless feuds between these Princes and constant fighting between their armies of samurai, as their followers were called. Japan was like England at the time of our War of the Roses: family quarrels were fought out in pitched battle. All that has now gone. The Daimios have become private gentlemen; the armies of samurai have been disbanded, and Japan is ruled and managed just like a European country, with judges, and policemen, and law-courts, after the model of Western lands.

When the Japanese decided to come out and take their place among the great nations of the world, they did not adopt any half-measures; they simply came out once and for all. They threw themselves into the stream of modern inventions and movements with a will. They have built railways and set up telegraph and telephone lines. They have erected banks and warehouses, mills and factories. They have built bridges and improved roads. They have law-courts and a Parliament, to which the members are elected by the people, and newspapers flourish everywhere.

Japan is a very beautiful country. It is full of fine mountains, with rivers leaping down the steep slopes and dashing over the rocks in snowy waterfalls....