Peeps At Many Lands: Australia 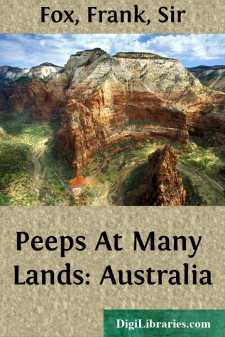 The fairy-story of the Sleeping Beauty might have been thought out by someone having Australia in his mind. She was the Sleeping Beauty among the lands of the earth—a great continent, delicately beautiful in her natural features, wonderfully rich in wealth of soil and of mine, left for many, many centuries hidden away from the life of civilization, finally to be wakened to happiness by the courage and daring of English sailors, who, though not Princes nor even knights in title, were as noble and as bold as any hero of a fairy-tale.

How Australia came to be in her curious isolated position in the very beginning is not quite clear. The story of some of the continents is told in their rocks almost as clearly as though written in books. But Australia is very, very old as a continent—much older than Europe or America or Asia—and its story is a little blurred and uncertain partly for that reason.

Look at the map and see its shape—something like that of a pancake with a big bite out of the north-eastern corner. In the very old days Australia was joined to those islands on the north—the East Indies—and through them to Asia; but it was countless ages ago, for the animals and the plants of Australia have not the least resemblance to those of Asia. They represent a class quite distinct in themselves. That proves that for a very long time there has been no land connection between Australia and Asia; if there had been, the types of flower and of beasts would be more nearly kindred. There would be tigers and elephants in Australia and emus in Asia, and the kangaroo and other marsupials would probably have disappeared. The marsupial, it may be explained, is one of the mammalian order, which carries its young about in a pouch for a long time after they are born. With such parental devotion, the marsupials would have little chance of surviving in any country where there were carnivorous animals to hunt them down; but Australia, with the exception of a very few dingoes, had no such animals, so the marsupials survived there whilst vanishing from all other parts of the earth.

When Australia was sundered from Asia, probably by some great volcanic outburst (the East Indies are to this day much subject to terrible earthquakes and volcanic outbreaks, and not so many years ago a whole island was destroyed in the Straits of Sunda), the new continent probably was in the shape somewhat of a ring, with very high mountains facing the sea, and, where now is the great central plain, a lake or inland sea. As time wore on, the great mountains were ground down by the action of the snow and the rain and the wind. The soil which was thus made was in part carried towards the centre of the ring, and in time the sea or lake vanished, and Australia took its present form of a great flat plain, through which flow sluggish rivers—a plain surrounded by a tableland and a chain of coastal mountains. The natives and the animals and plants of Australia, when it first became a continent, were very much the same, in all likelihood, as now.

Thus separated in some sudden and dramatic way, Australia was quite forgotten by the rest of the world. In Asia, near by, the Chinese built up a curious civilization, and discovered, among other things, the use of the mariner’s compass, but they do not seem to have ever attempted to sail south to what is now known as Australasia. The Japanese, borrowing culture from the Chinese, framed their beautiful and romantic social system, and, having a brave and enterprising spirit, became seafarers, and are known to have reached as far as the Hawaiian Islands, more than halfway across the Pacific Ocean to America; but they did not come to Australia. The Indian Empire rose to magnificent greatness; the Empires of Babylon, of Nineveh, of Persia, came and went. The Greeks, and the Romans later, penetrated to Hindustan....