Pedagogics as a System 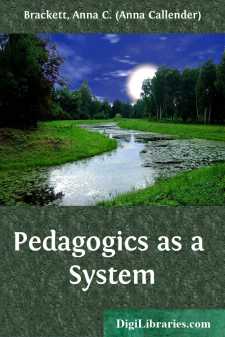 § 1. The science of Pedagogics cannot be derived from a simple principle with such exactness as Logic and Ethics. It is rather a mixed science which has its presuppositions in many others. In this respect it resembles Medicine, with which it has this also in common, that it must make a distinction between a sound and an unhealthy system of education, and must devise means to prevent or to cure the latter. It may therefore have, like Medicine, the three departments of Physiology, Pathology, and Therapeutics.

§ 2. Since Pedagogics is capable of no such exact definitions of its principle and no such logical deduction as other sciences, the treatises written upon it abound more in shallowness than any other literature. Short-sightedness and arrogance find in it a most congenial atmosphere, and criticism and declamatory bombast flourish in perfection as nowhere else. The literature of religious tracts might be considered to rival that of Pedagogics in its superficiality and assurance, if it did not for the most part seem itself to belong, through its ascetic nature, to Pedagogics. But teachers as persons should be treated in their weaknesses and failures with the utmost consideration, because they are most of them sincere in contributing their mite for the improvement of education, and all their pedagogic practice inclines them towards administering reproof and giving advice.

§ 3. The charlatanism of educational literature is also fostered by the fact that teaching has become one of the most profitable employments, and the competition in it tends to increase self-glorification.

—When "Boz" in his "Nicholas Nickleby" exposed the horrible mysteries of an English boarding-school, many teachers of such schools were, as he assures us, so accurately described that they openly complained he had aimed his caricatures directly at them.—

§ 4. In the system of the sciences, Pedagogics belongs to the Philosophy of Spirit,—and in this, to the department of Practical Philosophy, the problem of which is the comprehension of the necessity of freedom; for education is the conscious working of one will on another so as to produce itself in it according to a determinate aim. The idea of subjective spirit, as well as that of Art, Science, and Religion, forms the essential condition for Pedagogics, but does not contain its principle. If one thinks out a complete statement of Practical Philosophy (Ethics), Pedagogics may be distributed among all its grades. But the point at which Pedagogics itself becomes organic is the idea of the Family, because in the family the difference between the adults and the minors enters directly through the naturalness of spirit, and the right of the children to an education and the duty of parents towards them in this respect is incontestable. All other spheres of education, in order to succeed, must presuppose a true family life. They may extend and complement the business of teaching, but cannot be its original foundation.

—In our systematic exposition of Education, we must not allow ourselves to be led into error by those theories which do not recognize the family, and which limit the relation of husband and wife to the producing of children....