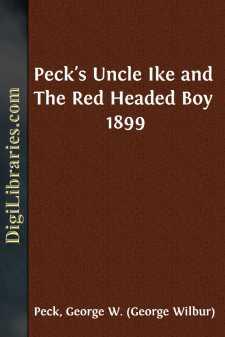 "Here, Uncle Ike, let me give you a nice piece of paper, twisted up beautifully, to light your pipe," said the red-headed boy, as Uncle Ike, with his long clay pipe, filled with ill-smelling tobacco, was feeling in his vest pocket for a match. "I should think nice white paper would be sweeter to light a pipe with than a greasy old match scratched on your pants," and the boy lighted a taper and handed it to the old man.

"No, don't try any new tricks on me," said Uncle Ike, as he brought out a match, from his vest pocket, picked off the shoddy that had collected on it in the bottom of his pocket, and hitched his leg around so he could scratch it on his trousers leg. "I have tried lighting my pipe with paper, and the odor of the paper kills the flavor of this 10-cent tobacco. Now, the brimstone on a match, added to the friction of the trousers leg, helps the flavor of the tobacco," and he drew the match across his trousers, and lighted his pipe, and as the smoke began to fill the room his good old face lighted up as though he had partaken of a rich wine. "I like to get a little accustomed to brimstone here on this earth, so, if I get on the wrong road when I die, and go where brimstone is the only fuel, I won't appear to the neighbors down there as though I was a tenderfoot. Wherever I go, I always want to appear as though it wasn't my first trip away from home. Ah, children," said the old man, as he blew smoke enough out of his mouth to call out a fire department, and laughed till the windows rattled, "there is lots of fun in this old world, if your pipe don't go out. Don't miss any fun, because when you die you don't know whether there is any fun going on or not."

"I believe, Uncle Ike, that you would have fun anywhere," said the boy, as he thought of the funny stories the old man had told him for many years, and listened to the laugh that acted as punctuation marks to all of Uncle Ike's remarks. "I would hate to trust you at a funeral. Did you ever laugh at a funeral, Uncle?"

"I came mighty near it once," said the old man, as he put his little finger in the pipe and pressed down the ashes, and let the smoke out again like the chimney of a factory.

"O, my! why don't they make you use a smoke consumer on that pipe, or cause you to use smokeless tobacco?" said the boy, as he coughed till the tears came to his eyes. "It looks in this room like burning a tar barrel when Dewey sunk the Spanish fleet. But tell us about your funny funeral."

"O, it wasn't so funny," said the old man, as he stroked the stubble on his chin, and a twinkle came all around his eyes. "It was only my thoughts that come near breaking up the funeral. There was an old friend of mine years ago, a newspaper man, who was the most genial and loving soul I ever knew, but he stuttered so you couldn't help laughing to hear him. He could write the most beautiful things without stuttering, but when he began to talk, and the talk would not come, and he stammered, and puckered up his dear face, and finally got the words out, chewed up into little pieces, with hyphens between the syllables, you had to laugh or die. We were great friends, and used to smoke and tell stories together, and pass evenings that I can now recall as the sweetest of my life. There were many things in which we were alike. We smoked the same kind of tobacco, in clay pipes, and lived on the same street, and, after an evening of pleasure, whichever of us was the least wearied with the day's work and night of enjoyment walked home with the other....