Peck's Sunshine Being a Collection of Articles Written for Peck's Sun, Milwaukee, Wis. - 1882 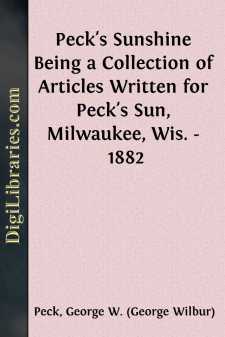 Gentlemen of the Jury: I stand before you charged with an attempt to "remove" the people of America by the publication of a new book, and I enter a plea of "Not Guilty." While admitting that the case looks strong against me, there are extenuating circumstances, which, if you will weigh them carefully, will go far towards acquitting me of this dreadful charge. The facts are that I am not responsible, I was sane enough up to the day that I decided to publish this book and have been since; but on that particular day I was taken possession of by an unseen power—a Chicago publisher-who filled my alleged mind with the belief that the country demanded the sacrifice, and that there would be money in it. If the thing is a failure, I want it understood that I was instigated by the Chicago man; but if it is a success, then, of course, it was an inspiration of my own.

The book contains nothing but good nature, pleasantly told yarns, jokes on my friends; and, through it all, there is not intended to be a line or a word that can cause pain or sorrow-nothing but happiness.

Laughter is the best medicine known to the world for the cure of many diseases that mankind is subject to, and it has been prescribed with success by some of our best practitioners. It opens up the pores, and restores the circulation of the blood, and the despondent patient that smiles, is in a fair way to recovery. While this book is not recommended as an infallible cure for consumption, if I can throw the patient into the blues by the pictures, I can knock the blues out by vaccinating with the reading matter.

To those who are inclined to look upon the bright side of life, this book is most respectfully dedicated by the author.

A St. Louis doctor factory recently turned out a dozen female doctors. As long as the female doctors were confined to one or two in the whole country, and these were experimental, the Sun held its peace, and did not complain; but now that the colleges are engaged in producing female doctors as a business, we must protest, and in so doing will give a few reasons why female doctors will not prove a paying branch of industry.

In the first place, if they doctor anybody it must be women, and three-fourths of the women had rather have a male doctor. Suppose these colleges turn out female doctors until there are as many of them as there are male doctors, what have they got to practice on?

A man, if there was nothing the matter with him, might call in a female doctor; but if he was sick as a horse—and when a man is sick he is sick as a horse—the last thing he would have around would be a female doctor. And why? Because when a man wants a female fumbling around him he wants to feel well. He don't want to be bilious, or feverish, with his mouth tasting like cheese, and his eyes bloodshot, when a female is looking over him and taking an account of stock.

Of course these female doctors are all young and good looking, and if one of them came into a sick room where a man was in bed, and he had chills, and was as cold as a wedge, and she should sit up close to the side of the bed, and take hold of his hand, his pulse would run up to a hundred and fifty and she would prescribe for a fever when he had chilblains....