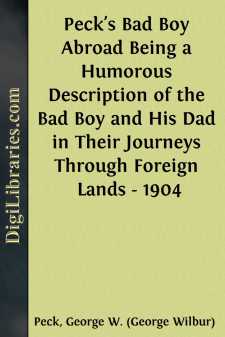 CHAPTER I. The Bad Boy and His Chum Call on the Old Grocery-man AfterBeing Away at School—The Bad Boy's Dad in a Bad Way.

The bad boy had been away to school, but the illness of his father had called him home, and for some weeks he had been looking about the old town. He had found few of his old friends. His father had recovered somewhat from his illness, and one day he met his old chum, a boy of his own age. The bad boy and the chum got busy at once, talking over the old times that tried the souls of the neighbors and finally the bad boy asked about the old groceryman, and found that the old man still held out at the old stand, with the same old stock of groceries, and they decided to call upon him, and surprise him. So after it began to be dark they entered the store, and found the old groceryman sitting on a cracker box by the stove, stroking the back of an old maltese cat that had a yellow streak on the back, where it had been singed by crawling under the red-hot stove. As the boys entered the store the cat raised its back, its tail became as large as a rolling pin, and the cat began to spit, while the old groceryman held up both hands and said:

"Don't shoot, please, but one of you go behind the counter and take what there is in the cash drawer, while the other one can reach into my pistol pocket and release my pocketbook. This is the fifth time I have been held up this year, and I have got so if I am not held up about so often I can't sleep nights."

"O, put down your hands and straighten out that cat's back," said the bad boy, as he slapped the old groceryman on the back so hard his spine cracked like a frozen sidewalk. "Don't you know us, you old geezer? We are the only and original Peck's Bad Boy and his Chum, come to life, and ready for business," and the two boys danced a jig on the floor, covered an inch thick with the spilled sugar of years ago, the molasses that had strayed from barrel, and the general refuse of the dirty place, which had become as hard as asphalt.

"O, dear, it is worse than I thought," said the old groceryman as he laughed a hysterical laugh through the long whiskers, and he hugged the boys as though he had a liking for them, notwithstanding the suffering they had caused him. "By gosh, I thought you were nothing but common robbers, who just wanted my money. You are old friends, and can have the whole place," and he poured some milk into a basin for the cat, but the animal only looked at the two boys as though she knew them, and watched them to see what was coming next.

The bad boy looked around the old grocery, which had not changed a particle during the time he had been away, the same old box of petrified prunes, the dried apples that could not be cut with a hatchet, the canned stuff on the shelves had become so old that the labels had curled up and fallen off, so it must have been a guess with the old groceryman whether he was selling a can of peas or tomatoes, and the old fellow standing there as though the world had gone off and left him, as his customers had....