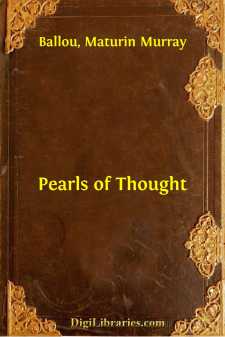 PEARLS OF THOUGHT. A.

Words must be fitted to a man's mouth,—'twas well said of the fellow that was to make a speech for my Lord Mayor, when he desired to take measure of his lordship's mouth.—Selden.

Absence.—Absence in love is like water upon fire; a little quickens, but much extinguishes it.—Hannah More.

Absence from those we love is self from self! A deadly banishment.—Shakespeare.

Whatever is genuine in social relations endures despite of time, error, absence, and destiny; and that which has no inherent vitality had better die at once. A great poet has truly declared that constancy is no virtue, but a fact.—Tuckerman.

We often wish most for our friends when they are absent. Even in married life love is not diminished by distance. A man, like a burning-glass, should be placed at a certain distance from the object he wishes to dissolve, in order that the proper focus may be obtained.—Richter.

Abstinence.—Refrain to-night, and that shall lend a hand of easiness to the next abstinence; the next more easy; for use almost can change the stamp of nature, and either curb the devil, or throw him out with wondrous potency.—Shakespeare.

Accident.—What reason, like the careful ant, draws laboriously together, the wind of accident collects in one brief moment.—Schiller.

What men call accident is God's own part.—P. J. Bailey.

Acquirements.—Every noble acquisition is attended with its risks: he who fears to encounter the one must not expect to obtain the other.—Metastasio.

Action.—Action can have no effect upon reasonable minds. It may augment noise, but it never can enforce argument. If you speak to a dog, you use action; you hold up your hand thus, because he is a brute; and in proportion as men are removed from brutes, action will have the less influence upon them.—Johnson.

Heaven ne'er helps the man who will not act.—Sophocles.

When Demosthenes was asked what was the first part of an orator, what the second, and what the third? he answered, "Action." The same may I say. If any should ask me what is the first, the second, the third part of a Christian, I must answer, "Action."—T. Brooks.

Our best conjectures, as to the true spring of actions, are very uncertain; the actions themselves are all we must pretend to know from history. That Cæsar was murdered by twenty-four conspirators, I doubt not; but I very much doubt whether their love of liberty was the sole cause.—Chesterfield....