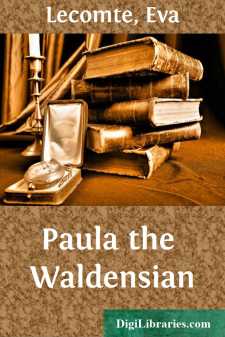 CHAPTER ONE AN UNEXPECTED LETTER

Clearly engraved on the walls of my memory there still remains a picture of the great gray house where I spent my childhood. It was originally used for more than a hundred years as the convent of the "White Ladies", with its four long galleries, one above the other, looking proudly down upon the humbler dwellings of the village. On the side of the house, where ran the broad road from Rouen to Darnetal, a high rugged wall surrounded a wide yard, guarded at the entrance by two massive doors, studded with enormous spikes. The naked barrenness of this yard was, to say the least, forbidding in the extreme; but the fertile fields on the other side of the house spread themselves like a vast and beautiful green carpet, dotted here and there with little villages, crowned with church spires and their corresponding belfries, from which on a Sunday morning pealed out the cheerful call to prayer and worship. The ancient convent long before our story begins had been transformed into a lovely dwelling with an immense garden on one side, edged by a dozen little brick houses that seemed so small that they made us children think of certain doll-houses that we used to see in the Paris magazines. They were known locally as the "Red Cottages." A long avenue of ancient elms separated us from these houses of our neighbors, and in front of the cottages stretched a line of stone benches, where, in the shade of the great trees, the old men of the village used to sit and recount to us tales of the days when the Convent flourished. Some of these stories made us shiver. (Indeed, they had a habit of straying into our dreams at night.)

The rest of the land around the Convent had, with the passing of the years, fallen into the hands of the villagers themselves. Each one had a small space for flowers in front and a vegetable garden behind.

Of course, our own garden covering the whole space in front of the Red Cottages, was a much more pretentious affair with its deep well, its many-colored kiosks, and its noisy bee-hives. In fact, it was in our eyes, the most enchanting corner of the earth.

I don't remember all the details about the special thing that happened one day, but I know that I shall never forget it to the end of my life.

We were at tea in the garden. Teresa, our old servant, was walking up and down in her kitchen. She never seemed to have time to sit down to eat Dear old Teresa! She always seemed like a mother to me, for we had lost our own dear mother when I was still in the cradle.

My brother and I had quarrelled over a mere nothing, when we were called in to tea by our father. Of course, we did not dare continue our dispute openly in front of him, but we continued our war-like activities by kicking each other under the table.

Louis was ten years old and I was nine. As he was older and a boy, he of course, considered that he had the right to the last word. Now kicks had replaced words; but as we were seated at quite a distance from one another, we did not succeed in causing very great damage to each other's shins....