Paul the Peddler, or the Fortunes of a Young Street Merchant 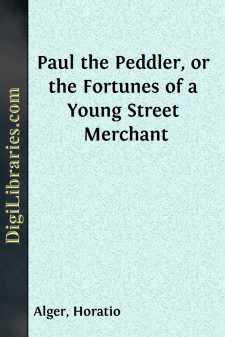 CHAPTER I PAUL THE PEDDLER

"Here's your prize packages! Only five cents! Money prize in every package! Walk up, gentlemen, and try your luck!"

The speaker, a boy of fourteen, stood in front of the shabby brick building, on Nassau street, which has served for many years as the New York post office. In front of him, as he stood with his back to the building, was a small basket, filled with ordinary letter envelopes, each labeled "Prize Package."

His attractive announcement, which, at that time, had also the merit of novelty—for Paul had himself hit upon the idea, and manufactured the packages, as we shall hereafter explain—drew around him a miscellaneous crowd, composed chiefly of boys.

"What's in the packages, Johnny?" asked a bootblack, with his box strapped to his back.

"There ain't much candy," answered the bootblack, with a disparaging glance.

"There's a ten-cent stamp in some of 'em. All have got something in 'em."

Influenced by this representation, the bootblack drew out a five-cent piece, and said:

"Pitch one over then. I guess I can stand it." An envelope was at once handed him.

"Open it, Johnny," said a newsboy at his side. Twenty curious eyes were fixed upon him as he opened the package. He drew out rather a scanty supply of candy, and then turning to Paul, with a look of indignation, said:

"Where's the prize? I don't see no prize. Give me back my five cents."

"Give it to me. I'll show you," said the young merchant.

He thrust in his finger, and drew out a square bit of paper, on which was written—One Cent.

"There's your prize," he added, drawing a penny from his pocket.

"I didn't say I put ten cents into every package," answered Paul.

"I'd burst up pretty quick if I did that. Who'll have another package? Only five cents!"

Curiosity and taste for speculation are as prevalent among children as with men, so this appeal produced its effect.

"Give me a package," said Teddy O'Brien, a newsboy, stretching out a dirty hand, containing the stipulated sum. He also was watched curiously as he opened the package. He drew out a paper bearing the words—Two Cents.

"Bully for you, Teddy! You've had better luck than I," said the bootblack.

The check was duly honored, and Teddy seemed satisfied, though the amount of candy he received probably could not have cost over half-a-cent. Still, he had drawn twice as large a prize as the first buyer, and that was satisfactory.

"Who'll take the next?" asked Paul, in a businesslike manner. "Maybe there's ten cents in this package. That's where you double your money. Walk up, gentlemen. Only five cents!"

Three more responded to this invitation, one drawing a prize of two cents, the other two of one cent each. Just then, as it seemed doubtful whether any more would be purchased by those present, a young man, employed in a Wall street house, came out of the post office....