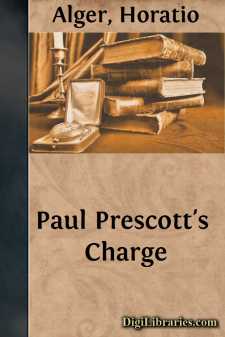 The speaker was a tall, pompous-looking man, whose age appeared to verge close upon fifty. He was sitting bolt upright in a high-backed chair, and looked as if it would be quite impossible to deviate from his position of unbending rigidity.

Squire Benjamin Newcome, as he was called, in the right of his position as Justice of the Peace, Chairman of the Selectmen, and wealthiest resident of Wrenville, was a man of rule and measure. He was measured in his walk, measured in his utterance, and measured in all his transactions. He might be called a dignified machine. He had a very exalted conception of his own position, and the respect which he felt to be his due, not only from his own household, but from all who approached him. If the President of the United States had called upon him, Squire Newcome would very probably have felt that he himself was the party who conferred distinction, and not received it.

Squire Newcome was a widower. His wife, who was as different from himself as could well be conceived, did not live long after marriage. She was chilled to death, as it was thought, by the dignified iceberg of whose establishment she had become a part. She had left, however, a child, who had now grown to be a boy of twelve. This boy was a thorn in the side of his father, who had endeavored in vain to mould him according to his idea of propriety. But Ben was gifted with a spirit of fun, sometimes running into mischief, which was constantly bursting out in new directions, in spite of his father's numerous and rather prosy lectures.

"Han-nah!" again called Squire Newcome, separating the two syllables by a pause of deliberation, and strongly accenting the last syllable,—a habit of his with all proper names.

Hannah was the Irish servant of all work, who was just then engaged in mixing up bread in the room adjoining, which was the kitchen.

Feeling a natural reluctance to appear before her employer with her hands covered with dough, she hastily washed them. All this, however, took time, and before she responded to the first summons, the second "Han-nah!" delivered with a little sharp emphasis, had been uttered.

At length she appeared at the door of the sitting-room.

"Han-nah!" said Squire Newcome, fixing his cold gray eye upon her, "when you hear my voice a calling you, it is your duty to answer the summons IMMEJIATELY."

I have endeavored to represent the Squire's pronunciation of the last word.

"So I would have come IMMEJOUSLY," said Hannah, displaying a most reprehensible ignorance, "but me hands were all covered with flour."

"That makes no difference," interrupted the Squire. "Flour is an accidental circumstance."

"What's that?" thought Hannah, opening her eyes in amazement.

"And should not be allowed to interpose an obstacle to an IMMEJIATE answer to my summons."

"Sir," said Hannah, who guessed at the meaning though she did not understand the words, "you wouldn't have me dirty the door-handle with me doughy hands?"

"That could easily be remedied by ablution."

"There ain't any ablution in the house," said the mystified Hannah....