by A. H. (Archibald Henry) Sayce 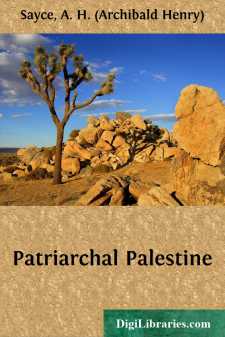 CHAPTER I THE LAND

Patriarchal Palestine! There are some who would tell us that the very name is a misnomer. Have we not been assured by the German critics and their English disciples that there were no patriarchs and no Patriarchal Age? And yet, the critics notwithstanding, the Patriarchal Age has actually existed. While criticism, so-called, has been busy in demolishing the records of the Pentateuch, archaeology, by the spade of the excavator and the patient skill of the decipherer, has been equally busy in restoring their credit. And the monuments of the past are a more solid argument than the guesses and prepossessions of the modern theorist. The clay tablet and inscribed stone are better witnesses to the truth than literary tact or critical scepticism. That Moses and his contemporaries could neither read nor write may have been proved to demonstration by the critic; yet nevertheless we now know, thanks to archaeological discovery, that it would have been a miracle if the critic were right. The Pentateuch is, after all, what it professes to be, and the records it contains are history and not romance.

The question of its authenticity involves issues more serious and important than those which have to do merely with history or archaeology. We are sometimes told indeed, in all honesty of purpose, that it is a question of purely literary interest, without influence on our theological faith. But the whole fabric of the Jewish Church in the time of our Lord was based upon the belief that the Law of Moses came from God, and that this God "is not a man that He should lie." And the belief of the Jewish Church was handed on to the Christian Church along with all its consequences. To revise that belief is to revise the dogmas of the Christian Church as they have been held for the last eighteen centuries; to reject it utterly is to reject the primary document of the faith into which we have been baptized.

It is not, however, with theological matters that we are now concerned. Patriarchal Palestine is for us the Palestine of the Patriarchal Age, as it has been disclosed by archaeological research, not the Palestine in which the revelation of God's will to man was to be made. It is sufficient for us that the Patriarchal Age has been shown by modern discovery to be a fact, and that in the narratives of the Book of Genesis we have authentic records of the past. There was indeed a Patriarchal Palestine, and the glimpses of it that we get in the Old Testament have been illustrated and supplemented by the ancient monuments of the Oriental world.

Whether the name of Palestine can be applied to the country with strict accuracy at this early period is a different question. Palestine is Philistia, the land of the Philistines, and the introduction of the name was subsequent to the settlement of the Philistines in Canaan and the era of their victories over Israel. As we shall see later on, it is probable that they did not reach the Canaanitish coast until the Patriarchal Age was almost, if not entirely, past Their name does not occur in the cuneiform correspondence which was carried on between Canaan and Egypt in the century before the Exodus, and they are first heard of as forming part of that great confederacy of northern tribes which attacked Egypt and Canaan in the days of Moses....