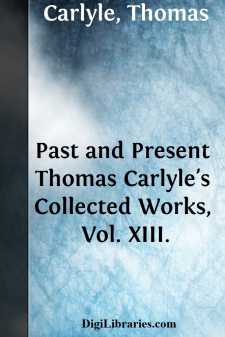 The condition of England, on which many pamphlets are now in the course of publication, and many thoughts unpublished are going on in every reflective head, is justly regarded as one of the most ominous, and withal one of the strangest, ever seen in this world. England is full of wealth, of multifarious produce, supply for human want in every kind; yet England is dying of inanition. With unabated bounty the land of England blooms and grows; waving with yellow harvests; thick-studded with workshops, industrial implements, with fifteen millions of workers, understood to be the strongest, the cunningest and the willingest our Earth ever had; these men are here; the work they have done, the fruit they have realised is here, abundant, exuberant on every hand of us: and behold, some baleful fiat as of Enchantment has gone forth, saying, "Touch it not, ye workers, ye master-workers, ye master-idlers; none of you can touch it, no man of you shall be the better for it; this is enchanted fruit!" On the poor workers such fiat falls first, in its rudest shape; but on the rich master-workers too it falls; neither can the rich master-idlers, nor any richest or highest man escape, but all are like to be brought low with it, and made 'poor' enough, in the money sense or a far fataler one.

Of these successful skilful workers some two millions it is now counted, sit in Workhouses, Poor-law Prisons; or have 'out-door relief' flung over the wall to them,—the workhouse Bastille being filled to bursting, and the strong Poor-law broken asunder by a stronger. They sit there, these many months now; their hope of deliverance as yet small. In workhouses, pleasantly so-named, because work cannot be done in them. Twelve-hundred-thousand workers in England alone; their cunning right-hand lamed, lying idle in their sorrowful bosom; their hopes, outlooks, share of this fair world, shut-in by narrow walls. They sit there, pent up, as in a kind of horrid enchantment; glad to be imprisoned and enchanted, that they may not perish starved. The picturesque Tourist, in a sunny autumn day, through this bounteous realm of England, descries the Union Workhouse on his path. 'Passing by the Workhouse of St. Ives in Huntingdonshire, on a bright day last autumn,' says the picturesque Tourist, 'I saw sitting on wooden benches, in front of their Bastille and within their ring-wall and its railings, some half-hundred or more of these men. Tall robust figures, young mostly or of middle age; of honest countenance, many of them thoughtful and even intelligent-looking men. They sat there, near by one another; but in a kind of torpor, especially in a silence, which was very striking. In silence: for, alas, what word was to be said? An Earth all lying round, crying, Come and till me, come and reap me;—yet we here sit enchanted! In the eyes and brows of these men hung the gloomiest expression, not of anger, but of grief and shame and manifold inarticulate distress and weariness; they returned my glance with a glance that seemed to say, "Do not look at us....