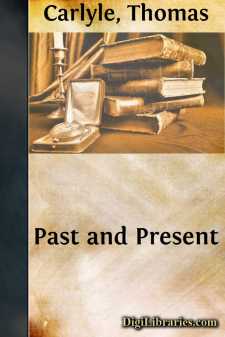 Here is Carlyle's new poem, his Iliad of English woes, to follow his poem on France, entitled the History of the French Revolution. In its first aspect it is a political tract, and since Burke, since Milton, we have had nothing to compare with it. It grapples honestly with the facts lying before all men, groups and disposes them with a master's mind, and, with a heart full of manly tenderness, offers his best counsel to his brothers. Obviously it is the book of a powerful and accomplished thinker, who has looked with naked eyes at the dreadful political signs in England for the last few years, has conversed much on these topics with such wisemen of all ranks and parties as are drawn to a scholar's house, until, such daily and nightly meditation has grown into a great connection, if not a system of thoughts; and the topic of English politics becomes the best vehicle for the expression of his recent thinking, recommended to him by the desire to give some timely counsels, and to strip the worst mischiefs of their plausibility. It is a brave and just book, and not a semblance. "No new truth," say the critics on all sides. Is it so? Truth is very old, but the merit of seers is not to invent but to dispose objects in their right places, and he is the commander who is always in the mount, whose eye not only sees details, but throws crowds of details into their right arrangement and a larger and juster totality than any other. The book makes great approaches to true contemporary history, a very rare success, and firmly holds up to daylight the absurdities still tolerated in the English and European system. It is such an appeal to the conscience and honour of England as cannot be forgotten, or be feigned to be forgotten. It has the merit which belongs to every honest book, that it was self-examining before it was eloquent, and so hits all other men, and, as the country people say of good preaching, "comes bounce down into every pew." Every reader shall carry away something. The scholar shall read and write, the farmer and mechanic shall toil, with new resolution, nor forget the book when they resume their labour.

Though no theocrat, and more than most philosophers, a believer in political systems, Mr. Carlyle very fairly finds the calamity of the times, not in bad bills of Parliament, nor the remedy in good bills, but the vice in false and superficial aims of the people, and the remedy in honesty and insight. Like every work of genius, its great value is in telling such simple truths. As we recall the topics, we are struck with force given to the plain truths; the picture of the English nation all sitting enchanted, the poor, enchanted so that they cannot work, the rich, enchanted so that they cannot enjoy, and are rich in vain; the exposure of the progress of fraud into all arts and social activities; the proposition that the labourer must have a greater share in his earnings; that the principle of permanence shall be admitted into all contracts of mutual service; that the state shall provide at least schoolmaster's education for all the citizens; the exhortation to the workman that he shall respect the work and not the wages; to the scholar that he shall be there for light; to the idle, that no man shall sit idle; the picture of Abbot Samson, the true governor, who "is not there to expect reason and nobleness of others, he is there to give them of his own reason and nobleness;" the assumption throughout the book, that a new chivalry and nobility, namely the dynasty of labour, is replacing the old nobilities....