Parkhurst Boys And Other Stories of School Life 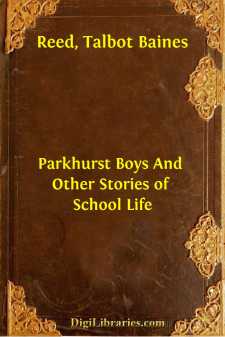 It was a proud moment in my existence when Wright, captain of our football club, came up to me in school one Friday and said, “Adams, your name is down to play in the match against Craven to-morrow.”

I could have knighted him on the spot. To be one of the picked “fifteen,” whose glory it was to fight the battles of their school in the Great Close, had been the leading ambition of my life—I suppose I ought to be ashamed to confess it—ever since, as a little chap of ten, I entered Parkhurst six years ago. Not a winter Saturday but had seen me either looking on at some big match, or oftener still scrimmaging about with a score or so of other juniors in a scratch game. But for a long time, do what I would, I always seemed as far as ever from the coveted goal, and was half despairing of ever rising to win my “first fifteen cap.” Latterly, however, I had noticed Wright and a few others of our best players more than once lounging about in the Little Close, where we juniors used to play, evidently taking observations with an eye to business. Under the awful gaze of these heroes, need I say I exerted myself as I had never done before? What cared I for hacks or bruises, so only that I could distinguish myself in their eyes? And never was music sweeter than the occasional “Bravo, young ’un!” with which some of them would applaud any special feat of skill or daring.

So I knew my time was coming at last, and only hoped it would arrive before the day of the Craven match, the great match of our season—always looked forward to as the event of the Christmas term, when victory was regarded by us boys as the summit of all human glory, and defeat as an overwhelming disgrace.

It will therefore be understood why I was almost beside myself with delight when, the very day before the match, Wright made the announcement I have referred to.

I scarcely slept a wink that night for dreaming of the wonderful exploits which were to signalise my first appearance in the Great Close—how I was to run the ball from one end of the field to the other, overturning, dodging, and distancing every one of the enemy, finishing up with a brilliant and mighty kick over the goal. After which I was to have my broken limbs set by a doctor on the spot, to receive a perfect ovation from friend and foe, to be chaired round the field, to be the “lion” at the supper afterwards, and finally to have a whole column of the Times devoted to my exploits! What glorious creatures we are in our dreams!

Well, the eventful day dawned at last. It was a holiday at Parkhurst, and as fine a day as any one could wish.

As I made my appearance, wearing the blue-and-red jersey of a “first fifteen man” under my jacket, I found myself quite an object of veneration among the juniors who had lately been my compeers, and I accepted their homage with a vast amount of condescension. Nothing was talked of during the forenoon but the coming match. Would the Craven fellows turn up a strong team?...