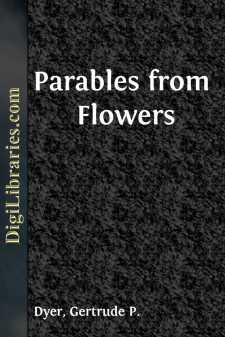 n the days of the long-ago, my ancestors did not dwell as we do now—in brooks or by the banks of shallow streams, but grew in wild luxuriance beneath the shade of overhanging trees, and under the wayside hedgerows.

We were always a quiet, unassuming race, and, indeed, I am fain to confess, were not held in more esteem by mortals than are our sweet cousins whom children call 'Bird's-eyes.' But some one made known to the world that pathetic 'Legend of the Rhine,' in which we are described, then people began to perceive that we were pretty,lovely indeed,—and to make a great fuss about us; but such is the way of the world!

Yet, though that legend is tenderly beautiful and thrilling, it is almost too romantic to please the taste of simple flowers, therefore I will tell you the true story how we acquired our name. That shall be my parable—see what it will teach!

We grew there, unheeded and unsought, on soft mossy banks, not the less lovely because unknown, and just above our dwelling-place a large oak spread abroad its leafy branches. It was a favourite tree of the birds, they felt so secure there, sheltered from prying eyes by its protecting leaves; besides, its branches were so firm and strong, they resisted bravely the fury of the storms that swept over them. What bird, then, would fear to build its nest there? And often have we listened to their sweet songs as they perched above us, and many times lifted our heads and gazed upon the happy inmates of those simple homes.

But there was one family among them that interested us even more than others, though all were dear to us. It was a pair of wrens who had by some strange accident taken up their abode in our oak, instead of a yew-tree as they generally do; and not only my family, but the whole colony of birds, old inhabitants of the tree, many of them, felt great interest in the new-comers, assisting them with advice, as they were but young.

Then, when building time came, how kind they all were! indeed, though it was a busy season with every bird, each anxious to finish its work, yet I heard an old Rook one day ask little Jenny Wren 'if he should help her,' as he met her trying to drag a large wisp of straw with all her tiny strength.

'No, thank you,' she gently replied; 'I must try to do it. We must all learn to bear our own burdens.'

But many times, however, I have seen the larger and stronger birds bring materials for making the nest close to the spot they had chosen, to save the little strangers weary journeys; and at last, after much patient labour, the home was finished, to the intense delight of the two builders, for both took their share in the work; but the joy was greater, when, after some time, three little birds made their appearance in the compact and cosy nest.

The event caused quite a sensation among the other dwellers in our old tree. Jays were constantly inquiring how the nestlings were getting on, an inquisitive Magpie peeped into the nest, trying to get a glimpse of the pretty ones, and received a sharp peck from the angry father as a reproof for the intrusion; as to the motherly Rooks, who were supposed to care for nothing save their own family concerns, they kindly advised the young parents how to rear the brood, saying, 'Care, care,' was all that was necessary; nay, it is even recorded, as an undoubted fact, that an old Owl, who had lived for ages in a hole in the tree, actually opened her eyes quite wide when the news was first told to her, although it was broad daylight!...