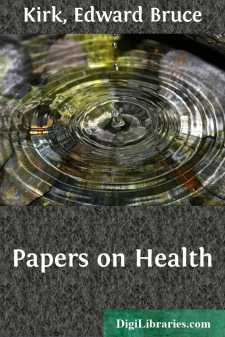 In this book we set forth a series of simple remedies and preventives of many common troubles. They are all well tried and have been proved by long experience to be effective and safe.

We give, as far as we know, the reasons why they are likely to do good, but we acknowledge that there are things which we cannot fully explain. For instance, we do not know why a well aired lather of M'Clinton's Soap should have the soothing effect it undoubtedly possesses, or why spreading handfuls of this lather over the stomach of a person suffering from retching or indigestion should give such relief, we only know that it does!

Some may sneer at the remedy and say it is a case of faith healing and assert that any other application, if put on with equal credulity, would have the same effect. But take a case that lately came under our notice. Indigestion and colic had rendered a baby a few weeks old restless and miserable from the day of its birth. The nurse was kept nursing it all night long, trying to soothe it; at last the mother who had frequently tried the soap lather for occasional attacks of indigestion, and always with good effect, determined to try it on the baby. It worked like a charm, the little one was at once soothed and slept all night, only waking once for its food. This was repeated for several nights, for until the lather was applied the child would not settle to sleep. In a few days the child was quite well, the habit of sleeping was established and the application was discontinued. Now it cannot be said that faith in the remedy had anything to do with the result in this case. We only wish every mother would have faith enough to give this simple treatment a fair trial, making up the lather as described in this book and not, as many do, "improving" on our method by rubbing the soap on the wet skin and making a sort of lather with the hand.

We may say that the soap used for making this lather is not M'Clinton's shaving soap. The latter is specially made to give a thick durable lather; for curative purposes use the lather from M'Clinton's toilet or household soap.

Again, why should the use of the linen underwear we recommend have such a beneficial effect on sufferers from rheumatism and various skin troubles? We have suggested possible explanations, and if these seem inadequate we can only say we know that it has these effects no matter how they are produced.

There are many things in nature that we cannot explain, and since the discovery of X Rays, Radium, etc., scientists are much less dogmatic in declaring anything impossible.

The diet we recommend for health and disease is as simple and cheap as our other treatment. That plain fare is good for both mind and body was proved by the four youths at the Babylonian Court over 2,000 years ago, but alas people squander that priceless boon, health, by letting appetite rule their lives.

We only ask for our treatment a fair trial on our lines. We claim that ours are common sense methods. Anyone can see that if a head is hot and fevered the application of a cold towel is likely to lower that heat and reduce the fever....