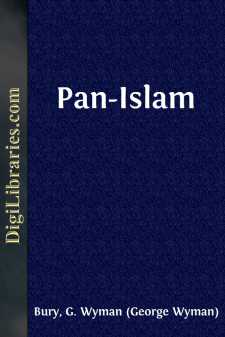 Much has been written about Christianity and Islam, so I hasten to inform my readers that this is not a religious treatise, nor do I class them with the globe-trotter who searched Benares brass-bazar diligently for "a really nice image of Allah" and pronounced the dread name of Hindustan's avenging goddess like an effervescing drink.

I presuppose that Christians or Moslems who read this book have got beyond the stage of calling each other pagans or kafirs, and it will have served its purpose if it brings about a friendlier feeling between the two great militant creeds whose adherents have confronted together many a stricken field.

Most people have heard of the pan-Islamic movement, especially during the War. Some of us have called it a political bogey and some a world-menace, but these are extremist views—it is really the practical protest of Moslems against the exploitation of their spiritual and material resources by outsiders.

Pan-Islam (as its name implies) is a movement to weld together Moslems throughout the world regardless of nationality. The ethics and ideals of Islam are more attainable to ordinary human beings than those of Christianity: whether it is better to aim high and score a partial success or aim lower and achieve is a matter of personal opinion and need not be discussed here, but one tangible fact stands out—that Islam, with its easier moral standard and frequent physical discipline of attitudes and observances connected with obligatory prayer, enters far more into the daily life of its adherents than Christianity does with us. Hence pan-Islam is more than a spiritual movement: it is a practical, working proposition which has to be reckoned with when dealing with Moslems even in secular matters.

Pan-Islam is no new thing—it is as old as the Hejira, and then helped to knit together Moslem Arabs against their pagan compatriots who were persecuting them. In the palmy days of the Abbaside Caliphate it was quiescent enough, and men of all creeds were welcomed at Baghdad for their art, learning, or handicraft when we were massacring Jews in London as part of a coronation pageant.

Medieval Moslems never fanned the movement into flame as long as they were let alone, and even now tribes living beyond the scope of missionaries and traders prefer the Christian traveller whom they know to the Moslem stranger from the coast whom they usually distrust, and who, to do him justice, seldom ventures among them, unless compelled by paramount self-interest, generally in connection with some European scheme or other.

Hitherto pan-Islam had been an instinctive and entirely natural riposte to the menace or actual aggression of non-Moslems; it assumed the character of a definite organisation under the crafty touch of that wily diplomat Abdul Hamid, once called by harsh critics "the Damned," though his efforts in that direction have been quite eclipsed by more recent exponents.

In extreme evangelical circles it used to be frequently urged that pan-Islam was a bugbear discovered, if not created, by one of India's most eminent Viceroys, whose remarks thereon are said to have given Abdul Hamid the hint....