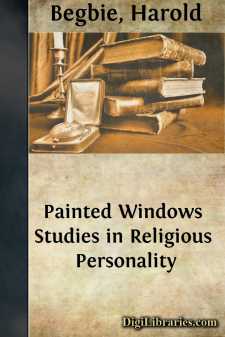 By means of a study in religious personality, I seek in these pages to discover a reason for the present rather ignoble situation of the Church in the affections of men.

My purpose is to examine the mind of modern Christianity, the only religion of the world with which the world can never be done, because it has the lasting quality of growth, and to see whether in the condition of that mind one cannot light upon a cause for the confessed failure of the Church to impress humanity with what its documents call the Will of God—a failure the more perplexing because of the wonderful devotion, sincerity, and almost boundless activity of the modern Church.

As a clue to the object of this quest, I would ask the reader to bear in mind that the present disordered state of the world is by no means a consequence of the late War.

The state of the world is one of confusion, but that confusion is immemorial. Man has for ever been wrestling with an anarchy which has for ever defeated him. The history of the human race is the diary of a Bear Garden. Man, so potent against the mightiest and most august forces of nature, has never been able to subdue those trivial and unworthy forces within his own breast—envy, hatred, malice, and all uncharitableness—which make for world anarchy. He has never been able to love God because he has never been able to love his neighbour. It is in the foremost nations of the world, not in the most backward, in the most Christian nations, not the most pagan, that we find unintelligent conditions of industrialism which lead to social disorder, and a vulgar disposition to self-assertion which makes for war. History and Homicide, it has been said, are indistinguishable terms. "Man is born free, and everywhere he is in chains."

This striking impotence of the human race to arrive at anything in the nature of a coherent world-order, this bewildering incapacity of individual man to live in love and charity with his neighbour, justifies the presumption that divine help, if ever given, that an Incarnation of the Divine Will, if ever vouchsafed, must surely have had for its chief mercy the teaching of a science of life—a way of existence which would bring the feet of unhappy man out of chaos, and finally make it possible for the human race to live intelligently, and so, beautifully.

Now if this indeed were the purpose of the Incarnation, we may be pardoned for thinking that the Church, which has been the cause of so much tyranny and bloodshed in the past, and which even now so willingly lends itself to bitter animosities and warlike controversies, has missed the whole secret of its first and greatest dogma.

I asked a certain Dean the other day whether the old controversy between High Church and Low Church still obtained in his diocese. "Oh, dear, no!" he replied; "High and Low are now united to fight Modernists."

Therefore in studying the modern mind of Christianity, persuaded that its mission is to teach mankind a lesson of quite sublime importance, we may possibly arrive in our conclusion at a unifying principle which will at least help the Church to turn its moral earnestness, its manifold self-sacrifice, and its great but conflicting energies, in this one direction which is its own supremest end, namely, the interpretation of human life in terms of spiritual reality.

To those who distrust reason and hold fast rather fearfully to the moorings of tradition, I would venture to say, first, that perilous times are most perilous to error, and, secondly, in the words of Dr. Kirsopp Lake, "After all, Faith is not belief in spite of evidence, but life in scorn of consequence—a courageous trust in the great purpose of all things and pressing forward to finish the work which is in sight, whatever the price may be."

He is in truth, in the power, in the hands, of another, of another will . . . attracted, corrected, guided, rewarded, satiated, in a long discipline, that "ascent of the soul into the intelligible world."—WALTER PATER.

No man occupies a more commanding position in the Churches of England than Dr. Gore. I am assured in more than one quarter that a vote on this subject would place him head and shoulders above all other religious teachers of our time....