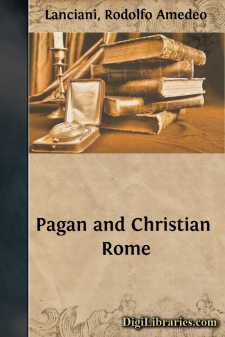 THE TRANSFORMATION OF ROME FROM A PAGAN INTO ACHRISTIAN CITY.

The early adoption of Christianity not confined to the poorer classes.—Instances of Roman nobles who were Christians.—The family of the Acilii Glabriones.—Manius Acilius the consul.—Put to death because of his religion.—Description of his tomb, recently discovered.—Other Christian patricians.—How was it possible for men in public office to serve both Christ and Cæsar?—The usual liberality of the emperors towards the new religion.—Nevertheless an open profession of faith hazardous and frequently avoided.—Marriages between Christians and pagans.—Apostasy resulting from these.—Curious discovery illustrating the attitude of Seneca's family towards Christianity.—Christians in the army.—The gradual nature of the transformation of Rome.—The significance of the inscription on the Arch of Constantine.—The readiness of the early Church to adopt pagan customs and even myths.—The curious mixture of pagan and Christian conceptions which grew out of this.—Churches became repositories for classical works of art, for which new interpretations were invented.—The desire of the early Christians to make their churches as beautiful as possible.—The substitution of Christian shrines for the old pagan altars at street corners.—Examples of both.—The bathing accommodations of the pagan temples adopted by the Church.—Also the custom of providing public standards of weights and measures.—These set up in the basilicas.—How their significance became perverted in the Dark Ages.—The adoption of funerary banquets and their degeneration.—The public store-houses of the emperors and those of the popes.—Pagan rose-festivals and their conversion into a Christian institution.

It has been contended, and many still believe, that in ancient Rome the doctrines of Christ found no proselytes, except among the lower and poorer classes of citizens. That is certainly a noble picture which represents the new faith as searching among the haunts of poverty and slavery, seeking to inspire faith, hope, and charity in their occupants; to transform them from things into human beings; to make them believe in the happiness of a future life; to alleviate their present sufferings; to redeem their children from shame and servitude; to proclaim them equal to their masters. But the gospel found its way also to the mansions of the masters, nay, even to the palace of the Cæsars. The discoveries lately made on this subject are startling, and constitute a new chapter in the history of imperial Rome. We have been used to consider early Christian history and primitive Christian art as matters of secondary importance, and hardly worthy the attention of the classical student. Thus, none of the four or five hundred volumes on the topography of ancient Rome speaks of the basilicas raised by Constantine; of the church of S. Maria Antiqua, built side by side with the Temple of Vesta, the two worships dwelling together as it were, for nearly a century; of the Christian burial-grounds; of the imperial mausoleum near S....