Overland through Asia; Pictures of Siberian, Chinese, and Tartar Life 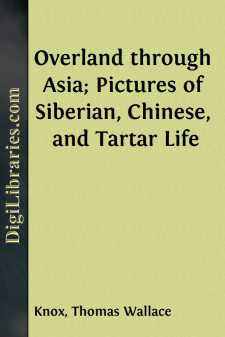 It is said that an old sailor looking at the first ocean steamer, exclaimed, "There's an end to seamanship." More correctly he might have predicted the end of the romance of ocean travel. Steam abridges time and space to such a degree that the world grows rapidly prosaic. Countries once distant and little known are at this day near and familiar. Railways on land and steamships on the ocean, will transport us, at frequent and regular intervals, around the entire globe. From New York to San Francisco and thence to our antipodes in Japan and China, one may travel in defiance of propitious breezes formerly so essential to an ocean voyage. The same untiring power that bears us thither will bring us home again by way of Suez and Gibraltar to any desired port on the Atlantic coast. Scarcely more than a hundred days will be required for such a voyage, a dozen changes of conveyance and a land travel of less than a single week.

The tour of the world thus performed might be found monotonous. Its most salient features beyond the overland journey from the Atlantic to the Pacific, would be the study of the ocean in breeze or gale or storm, a knowledge of steamship life, and a revelation of the peculiarities of men and women when cribbed, cabined, and confined in a floating prison. Next to matrimony there is nothing better than a few months at sea for developing the realities of human character in either sex. I have sometimes fancied that the Greek temple over whose door "Know thyself" was written, was really the passage office of some Black Ball clipper line of ancient days. Man is generally desirous of the company of his fellow man or woman, but on a long sea voyage he is in danger of having too much of it. He has the alternative of shutting himself in his room and appearing only at meal times, but as solitude has few charms, and cabins are badly ventilated, seclusion is accompanied by ennui and headache in about equal proportions.

Wishing to make a journey round the world, I did not look favorably upon the ocean route. The proportions of water and land were much like the relative quantities of sack and bread in Falstaff's hotel bill. Whether on the Atlantic or the Pacific, the Indian, or the Arctic, the appearance of Ocean's blue expanse is very much the same. It is water and sky in one place, and sky and water in another. You may vary the monotony by seeing ships or shipping seas, but such occurrences are not peculiar to any one ocean. Desiring a reasonable amount of land travel, I selected the route that included Asiatic and European Russia. My passport properly endorsed at the Russian embassy, authorized me to enter the empire by the way of the Amoor river.

A few days before the time fixed for my departure, I visited a Wall street banking house, and asked if I could obtain a letter of credit to be used in foreign travel.

"Certainly sir," was the response.

"Will it be available in Asia?"

"Yes, sir. You can use it in China, India, or Australia, at your pleasure." "Can I use it in Irkutsk?"

"It is the capital of Eastern Siberia."

The person with whom I conversed, changed from gay to grave, and from lively to severe....