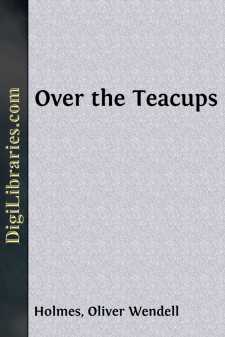 This series of papers was begun in March, 1888. A single number was printed, when it was interrupted the course of events, and not resumed until nearly years later, in January, 1890. The plan of the series was not formed in my mind when I wrote the number. In returning to my task I found that my original plan had shaped itself in the underground laboratory of my thought so that some changes had to be made in what I had written. As I proceeded, the slight story which formed a part of my programme eloped itself without any need of much contrivance on my part. Given certain characters in a writer's conception, if they are real to him, as they ought to be they will act in such or such a way, according to the law of their nature. It was pretty safe to assume that intimate relations would spring up between some members of our mixed company; and it was not rash conjecture that some of these intimacies might end in such attachment as would furnish us hints, at least, of a love-story.

As to the course of the conversations which would take place, very little could be guessed beforehand. Various subjects of interest would be likely to present themselves, without definite order, oftentimes abruptly and, as it would seem, capriciously. Conversation in such a mixed company as that of "The Teacups" is likely to be suggestive rather than exhaustive. Continuous discourse is better adapted to the lecture-room than to the tea-table. There is quite enough of it, I fear too much,—in these pages. But the reader must take the reports of our talks as they were jotted down. A patchwork quilt is not like a piece of Gobelin tapestry; but it has its place and its use.

Some will feel a temptation to compare these conversations with those earlier ones, and remark unamiably upon their difference. This is hardly fair, and is certainly not wise. They are produced under very different conditions, and betray that fact in every line. It is better to take them by themselves; and, if my reader finds anything to please or profit from, I shall be contented, and he, I feel sure, will not be ungrateful.

The readers who take up this volume may recollect a series of conversations held many years ago over the breakfast-table, and reported for their more or less profitable entertainment. Those were not very early breakfasts at which the talks took place, but at any rate the sun was rising, and the guests had not as yet tired themselves with the labors of the day. The morning cup of coffee has an exhilaration about it which the cheering influence of the afternoon or evening cup of tea cannot be expected to reproduce. The toils of the forenoon, the heats of midday, in the warm season, the slanting light of the descending sun, or the sobered translucency of twilight have subdued the vivacity of the early day. Yet under the influence of the benign stimulant many trains of thought which will bear recalling, may suggest themselves to some of our quiet circle and prove not uninteresting to a certain number of readers....