Over the Side Captains All, Book 6. 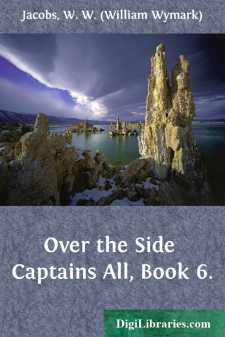 Of all classes of men, those who follow the sea are probably the most prone to superstition. Afloat upon the black waste of waters, at the mercy of wind and sea, with vast depths and strange creatures below them, a belief in the supernatural is easier than ashore, under the cheerful gas-lamps. Strange stories of the sea are plentiful, and an incident which happened within my own experience has made me somewhat chary of dubbing a man fool or coward because he has encountered something he cannot explain. There are stories of the supernatural with prosaic sequels; there are others to which the sequel has never been published.

I was fifteen years old at the time, and as my father, who had a strong objection to the sea, would not apprentice me to it, I shipped before the mast on a sturdy little brig called the Endeavour, bound for Riga. She was a small craft, but the skipper was as fine a seaman as one could wish for, and, in fair weather, an easy man to sail under. Most boys have a rough time of it when they first go to sea, but, with a strong sense of what was good for me, I had attached myself to a brawny, good-natured infant, named Bill Smith, and it was soon understood that whoever hit me struck Bill by proxy. Not that the crew were particularly brutal, but a sound cuffing occasionally is held by most seamen to be beneficial to a lad's health and morals. The only really spiteful fellow among them was a man named Jem Dadd. He was a morose, sallow-looking man, of about forty, with a strong taste for the supernatural, and a stronger taste still for frightening his fellows with it. I have seen Bill almost afraid to go on deck of a night for his trick at the wheel, after a few of his reminiscences. Rats were a favourite topic with him, and he would never allow one to be killed if he could help it, for he claimed for them that they were the souls of drowned sailors, hence their love of ships and their habit of leaving them when they became unseaworthy. He was a firm believer in the transmigration of souls, some idea of which he had, no doubt, picked up in Eastern ports, and gave his shivering auditors to understand that his arrangements for his own immediate future were already perfected.

We were six or seven days out when a strange thing happened. Dadd had the second watch one night, and Bill was to relieve him. They were not very strict aboard the brig in fair weather, and when a man's time was up he just made the wheel fast, and, running for'ard, shouted down the fo'c's'le. On this night I happened to awake suddenly, in time to see Bill slip out of his bunk and stand by me, rubbing his red eyelids with his knuckles.

"Dadd's giving me a long time," he whispered, seeing that I was awake; "it's a whole hour after his time."

He pattered up on deck, and I was just turning over, thankful that I was too young to have a watch to keep, when he came softly down again, and, taking me by the shoulders, shook me roughly.

I raised myself on my elbows, and, in the light of the smoking lamp, saw that he was shaking all over....