Over the Plum Pudding 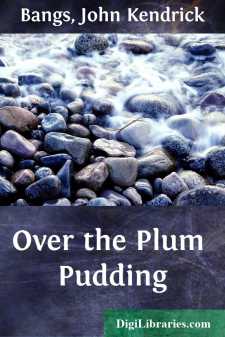 have been asked so often and by so many persons known and unknown to me why it was that a Christmas book that was to have been issued some years ago under my editorial supervision never appeared, although announced as ready for immediate publication, that I feel that I should make some statement in explanation of the seeming deception. The matter was very annoying, both to my publishers and to myself at the time it happened, and while I was anxious then to make public a full and candid statement of the facts as they occurred, Messrs. Hawkins, Wilkes & Speedway deemed it the wiser course to let the affair rest for a year or two anyhow. They failed to see my point of view, that, while they were responsible for the advertisement, I was assumed to be responsible for the book, and in the event of its failure to appear it would naturally be inferred by the public that my work had not proven sufficiently up to standard to warrant them in continuing the venture. I did not press the matter, however, being too busy on other affairs to give to it the attention it deserved, and until now no opportunity to explain my connection with the unfortunate volume has arisen. I should hesitate even at this late date to give a wide publicity to the incident were it not that my mail has lately been overburdened by rather peremptory requests from the several contributors to the volume to be informed what had become of the tales they wrote and for which they were to be paid on publication. Ordinarily, letters of this kind I should refer to my business principals, the publishers themselves, but in this emergency it happens, unfortunately for me, that the publishers have been retired from business and are now engaged in other pursuits: one of them at the Klondike, another as a veterinary surgeon-general at Santiago, on the appointment of the Secretary of War, and the third living somewhere abroad incog. as the result of his having drawn out all the capital of his partners and fled one early spring morning two years ago, leaving behind him his best wishes and about eight thousand dollars in debts for his partners to pay. It therefore devolves on me to explain to the irate authors as best I can what happened. The explanation may not be shirked, for they are wholly within their rights in demanding it. My only hope is that they will be satisfied with my statement, although I am quite conscious, sadly so, of the fact that to certain suspicious minds it may seem to lack credibility.

To begin, I will place the responsibility for the whole affair where it belongs. It was the fault of no less a person than Mr. Rudyard Kipling. Mr. Andrew Lang's connection with the episode, of course, involved us in the final catastrophe, but he is not to blame. Mr. Kipling started the whole affair, and if Mulvaney and Ortheris and Learoyd had behaved themselves properly the book would now be resting calmly upon many an appreciative library shelf, instead of being, as it is, but a sorrowful memory and a possible cause for a series of international lawsuits....