Outwitting Our Nerves A Primer of Psychotherapy

by Josephine A. Jackson 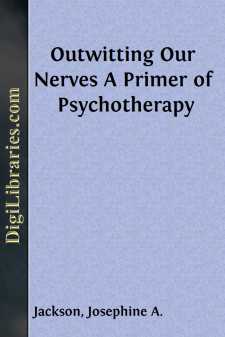 In Which Most of Us Plead Guilty to the Charge of "Nerves."

Whenever the subject of "nerves" is mentioned most people begin trying to prove an alibi. The man who is nervous and knows that he is nervous, realizes that he needs help, but the man who has as yet felt no lack of stability in himself is quite likely to be impatient with that whole class of people who are liable to nervous breakdown. It is therefore well to remind ourselves at once that the line between the so-called "normal" and the nervous is an exceedingly fine one. "Nervous invalids and well people are indistinguishable both in theory and in practice," and "after all we are most of us more or less neurasthenic." The fact is that everybody is a possible neurotic.

So, as we think about nervous folk and begin to recognize our friends and relatives in this class, it may be that some of us will unexpectedly find ourselves looking in the mirror. Some of our lifelong habits may turn out to be nervous tricks. At any rate, it behooves us to be careful about throwing stones, for most of us live in houses that are at least part glass.

Am I "Like Folks"? Before we begin to talk about the real sufferer from "nerves," the nervous invalid, let us look for some of the earmarks that are often found on the supposedly well person. All of these signs are deviations from the normal and are sure indications of nervousness. The test question for each individual is this: "Am I 'like folks'?" To be normal and to be well is to be "like folks." Can the average man stand this or that? If he can, then you are not normal if you cannot. Do the people around you eat the thing that upsets you? If they do, ten chances to one your trouble is not a physical idiosyncrasy, but a nervous habit. In bodily matters, at least, it is a good thing to be one of the crowd.

Many people who would resent being called anything but normal—in general—are not at all loth to be thought "different," when it comes to particulars. Are there not many of us who are at small pains to hide the fact that we "didn't sleep a wink last night," or that we "can't stand" a ticking clock or a crowing rooster? We sometimes consider it a mark of distinction to have a delicate appetite and to have to choose our food with care. If we are frank with ourselves, some of us will have to admit that our own ailments seem interesting, while the other person's ills are "merely nervous" or imaginary or abnormal. After all, a good many of us will have to plead guilty to the charge of nervousness.

We have only to read the endless advertisements of cathartics and "internal baths," or to check up the quantity of laxatives sold at any drug store, to realize the wide-spread bondage to that great bugaboo constipation. He who is constipated can hardly prove an alibi to "nerves." Then there are the school-teachers and others who are worn out at the end of each year's work, hardly able to hold on until vacation; and the people who can't manage their tempers; and those who are upset over trifles; and those who are dissatisfied with life....