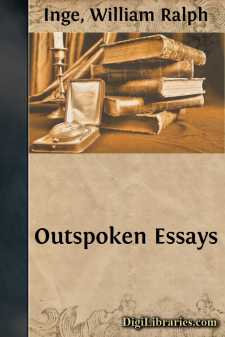 The Essays in this volume were written at various times before and during the Great War. In reading them through for republication, I have to ask myself whether my opinions on social science and on the state of religion, the two subjects which are mainly dealt with in this collection, have been modified by the greatest calamity which has ever befallen the civilised world, or by the issue of the struggle. I find very little that I should now wish to alter. The war has caused events to move faster, but in the same direction as before. The social revolution has been hurried on; the inevitable counter-revolution has equally been brought nearer. For if there is one safe generalisation in human affairs, it is that revolutions always destroy themselves. How often have fanatics proclaimed 'the year one'! But no revolutionary era has yet reached 'year twenty-five.' As regards the national character, there is no sign, I fear, that much wisdom has been learnt. We are more wasteful and reckless than ever. The doctrinaire democrat still vapours about democracy, though representative government has obviously lost both its power and its prestige. The labour party still hugs its comprehensive assortment of economic heresies. Organised religion remains as impotent as it was before the war. But one fact has emerged with startling clearness. Human nature has not been changed by civilisation. It has neither been levelled up nor levelled down to an average mediocrity. Beneath the dingy uniformity of international fashions in dress, man remains what he has always been—a splendid fighting animal, a self-sacrificing hero, and a bloodthirsty savage. Human nature is at once sublime and horrible, holy and satanic. Apart from the accumulation of knowledge and experience, which are external and precarious acquisitions, there is no proof that we have changed much since the first stone age.

The war itself, as we shall soon be compelled to recognise, had its roots deep in the political and social structure of Europe. The growth of wealth and population, and the law of diminishing returns, led to a scramble for unappropriated lands producing the raw materials of industry. It was, in a sense, a war of capital; but capitalism is no accretion upon the body politic; it is the creator of the modern world and an essential part of a living organism. The Germans unquestionably made a deep-laid plot to capture all markets and cripple or ruin all competitors. Their aims and methods were very like those of the Standard Oil Trust on a still larger scale. The other nations had not followed the logic of competition in the same ruthless manner; there were several things which they were not willing to do. But war to the knife cannot be confined to one of the combatants; the alternative, Weltmacht oder Niedergang, was thrust by Germany upon the Allies when she chose that motto for herself. If the modern man were as much dominated by economic motives as is sometimes supposed, the suicidal results of such a conflict would have been apparent to all; but the poetry and idealism of human nature, no longer centred, as formerly, in religion, had gathered round a romantic patriotism, for which the belligerents were willing to sacrifice their all without counting the cost....