Outlines of Dairy Bacteriology, 8th edition A Concise Manual for the Use of Students in Dairying 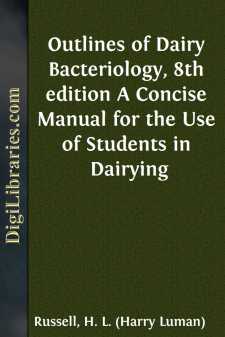 CHAPTER I. STRUCTURE OF THE BACTERIA AND CONDITIONS GOVERNING THEIR DEVELOPMENT AND DISTRIBUTION.

Before one can gain any intelligent conception of the manner in which bacteria affect dairying, it is first necessary to know something of the life history of these organisms in general, how they live, move and react toward their environment.

Nature of Bacteria. Toadstools, smuts, rusts and mildews are known to even the casual observer, because they are of evident size. Their plant-like nature can be more readily understood from their general structure and habits of life. The bacteria, however, are so small, that under ordinary conditions, they only become evident to our unaided senses by the by-products of their activity.

When Leeuwenhoek (pronounced Lave-en-hake) in 1675 first discovered these tiny, rapidly-moving organisms he thought they were animals. Indeed, under a microscope, many of them bear a close resemblance to those minute worms found in vinegar that are known as "vinegar-eels." The idea that they belonged to the animal kingdom continued to hold ground until after the middle of the nineteenth century; but with the improvement in microscopes, a more thorough study of these tiny structures was made possible, and their vegetable nature demonstrated. The bacteria as a class are separated from the fungi mainly by their method of growth; from the lower algae by the absence of chlorophyll, the green coloring matter of vegetable organisms.

Structure of bacteria. So far as structure is concerned the bacteria stand on the lowest plane of vegetable life. The single individual is composed of but a single cell, the structure of which does not differ essentially from that of many of the higher types of plant life. It is composed of a protoplasmic body which is surrounded by a thin membrane that separates it from neighboring cells that are alike in form and size.

Form and size. When a plant is composed of a single cell but little difference in form is to be expected. While there are intermediate stages that grade insensibly into each other, the bacteria may be grouped into three main types, so far as form is concerned. These are spherical, elongated, and spiral, and to these different types are given the names, respectively, coccus, bacillus and spirillum (plural, cocci, bacilli, spirilla) (fig. 1). A ball, a short rod, and a corkscrew serve as convenient models to illustrate these different forms.

In size, the bacteria are the smallest organisms that are known to exist. Relatively there is considerable difference in size between the different species, yet in absolute amount this is so slight as to require the highest powers of the microscope to detect it....