Out of Time's Abyss 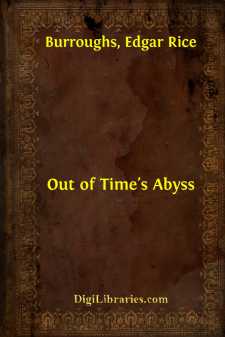 This is the tale of Bradley after he left Fort Dinosaur upon the west coast of the great lake that is in the center of the island.

Upon the fourth day of September, 1916, he set out with four companions, Sinclair, Brady, James, and Tippet, to search along the base of the barrier cliffs for a point at which they might be scaled.

Through the heavy Caspakian air, beneath the swollen sun, the five men marched northwest from Fort Dinosaur, now waist-deep in lush, jungle grasses starred with myriad gorgeous blooms, now across open meadow-land and parklike expanses and again plunging into dense forests of eucalyptus and acacia and giant arboreous ferns with feathered fronds waving gently a hundred feet above their heads.

About them upon the ground, among the trees and in the air over them moved and swung and soared the countless forms of Caspak's teeming life. Always were they menaced by some frightful thing and seldom were their rifles cool, yet even in the brief time they had dwelt upon Caprona they had become callous to danger, so that they swung along laughing and chatting like soldiers on a summer hike.

"This reminds me of South Clark Street," remarked Brady, who had once served on the traffic squad in Chicago; and as no one asked him why, he volunteered that it was "because it's no place for an Irishman."

"South Clark Street and heaven have something in common, then," suggested Sinclair. James and Tippet laughed, and then a hideous growl broke from a dense thicket ahead and diverted their attention to other matters.

"One of them behemoths of 'Oly Writ," muttered Tippet as they came to a halt and with guns ready awaited the almost inevitable charge.

For a moment no further sound came from the thicket. "He may be feeding now," suggested Bradley. "We'll try to go around him. Can't waste ammunition. Won't last forever. Follow me." And he set off at right angles to their former course, hoping to avert a charge. They had taken a dozen steps, perhaps, when the thicket moved to the advance of the thing within it, the leafy branches parted, and the hideous head of a gigantic bear emerged.

The men looked about them. The bear took a couple of steps forward, still growling menacingly. He was exposed to the shoulders now. Tippet took one look at the monster and bolted for the nearest tree; and then the bear charged. He charged straight for Tippet. The other men scattered for the various trees they had selected—all except Bradley. He stood watching Tippet and the bear. The man had a good start and the tree was not far away; but the speed of the enormous creature behind him was something to marvel at, yet Tippet was in a fair way to make his sanctuary when his foot caught in a tangle of roots and down he went, his rifle flying from his hand and falling several yards away. Instantly Bradley's piece was at his shoulder, there was a sharp report answered by a roar of mingled rage and pain from the carnivore....