Out of the Triangle: a story of the Far East 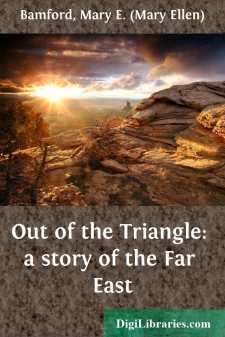 A voice rang through one of the streets of Alexandria.

The white-robed priestesses of Ceres, carrying a sacred basket, walked in procession through the Alexandrian street, and as they walked they cried aloud their warning.

So, for four centuries, since the reign of Ptolemy Philadelphus, had priestesses of Ceres walked and called aloud their admonitions through this city; though of late years men had come to know that what the sacred basket held was a live snake, supposed to be the author of sin and death.

Among the passing people, the lad Heraklas shrank back. When the sacred basket of Ceres had met him, he had bent his eyes downward, deeming himself unworthy of the sight. And now, as the crier's invitation rang from the portico, "All ye who are guiltless in thought and deed, come to the sacrifice!" Heraklas trembled.

Swiftly he hurried away and passed down the broad street that led to the Gate of the Moon on the south of Alexandria.

At length he reached the gate, but swiftly yet he pushed forward a short distance along the vineyard-fringed banks of Lake Mareotis. Heraklas lifted up his eyes, and marked how the vines by the lake's side contrasted with the burning whiteness of the desert beyond. The glaring sand shimmered in the heat of the flaming Egyptian sun. A thin, vapory mist seemed to move above the heated, barren surface of the grim sea of sand. Heraklas stretched out his hands in agony toward the desert, and cried aloud, "O my brother, my brother Timokles! How shall I live without thee?"

The soft ripple of the lake beside him seemed like mockery. The tears rolled slowly down his cheeks, as he looked toward the pitilessly unresponsive desert of the west and southwest. Then Heraklas, helpless in his misery, raised his hands with the palms outward before him, after the custom of an Egyptian in prayer, and addressed him whom the Egyptians thought the maker of the sun, the god Phthah, "the father of the beginnings," "the first of the gods of the upper world."

"Hail to thee, O Ptahtanen," began Heraklas, "great god who concealeth his form, . . thou art watching when at rest; the father of all fathers and of all gods. . . Watcher, who traversest the endless ages of eternity."

The familiar words brought no comfort. Between him and the shimmering desert came the memory of his brother's face, and Heraklas forgot Ptahtanen, and cried out again in desperation.

His eyes strained toward the desert. Somewhere in its depths, his twin brother Timokles, the being whom of all on earth Heraklas most loved, lived,—or perhaps, in the brief week that had elapsed since he was snatched from his Alexandrian home, had died....