Our Stage and Its Critics By "E.F.S." of "The Westminster Gazette" 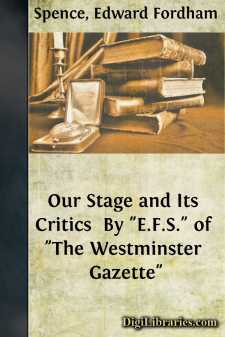 CHAPTER I THE DRAMATIC CRITIC His Qualifications

The production of a play in the Russian tongue renders topical a phrase once used, not unhappily, by Mr Cecil Raleigh concerning the qualifications of the dramatic critic. After listening to a somewhat extravagant speech about the duties of the critic, he said that the dramatic critic ought, apparently, to be a "polyglot archangel." During the last few years we have had plays in Russian, Japanese, Bavarian patois, Dutch, German, French and Italian, to say nothing of East End performances in Hebrew and Yiddish, which we neglect. Latin drama we hear at Westminster; a Greek company came to the Court but did not act. A Chinese has been promised, and a Turkish drama threatened; Danish has been given; there are awful hopes of Gaelic and Erse; and goodness knows why we have escaped Echegaray, Lope di Vega and Calderon in the original. A Mezzofanti would be at a premium in the craft if knowledge of languages alone were sufficient; but one may know many tongues and possess no judgment. We have to accept great responsibilities. Some people measure the greatness of the responsibilities by the amount of money involved in theatrical enterprises; it is hardly necessary to discuss seriously this point of view. Nevertheless the fact remains that the voice of the critics has some effect upon the fortunes of ventures involving large sums of money and the employment of many people. It is rather curious to see how lightly as a rule the influence of the critics is regarded; for instance, from some remarks uttered by Sir John Hare it appears that he thinks they are not influential. Here are his words taken from an interview published in a newspaper.

The Interviewer: "How is public taste formed? Do newspaper criticisms affect it?"

This view is rarely pressed upon a jury by the plaintiff in a libel action, and it may be remarked that although, when a play is running well, some managers almost ignore us, as soon as business drops they become delightfully amiable and long for our presence. Moreover, at considerable expense, they quote our opinions if favourable—even with judicious modifications when unfavourable.

Perhaps the matter of languages is not of very great importance, seeing that most of the critic's work concerns English Drama, or drama in what is supposed to be English, which, too often, is quite a different thing. What, then, are the necessary qualifications of the critic who takes his work and himself seriously?

He should have some knowledge of music—enough, at least, to know whether incidental or "melodrama" music is congruous with the time, place and occasion of the play, and to be able to identify well-known works. At a time when money is spent very lavishly upon scenery and costumes, he ought to possess some theories, or at least ideas, concerning pictorial art, the history of modern painting and the like, and be capable of guessing what a daring experimentalist like Mr Gordon Craig is aiming at and what relation his scene-pictures bear to the current cant of the art critic....