Our Sailors Gallant Deeds of the British Navy during Victoria's Reign 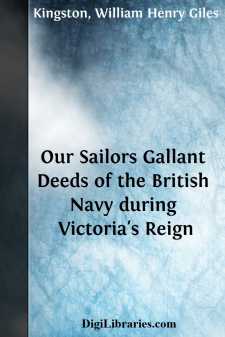 “Let fall the topsails, hoist away—up anchor, round goes the capstan—sheet home—haul taut the braces! and away we glide, to prove to our countrymen that British sailors have not been sleeping on beds of roses for the last quarter of a century since her gracious Majesty Queen Victoria came to the throne.” So wrote our author some forty years ago. “Up anchor, full speed ahead,” is, we suppose, the modern equivalent for his nautical simile, and very prosaic and commonplace it sounds; but we shall find that the romance of the Navy did not go out with the last of the sailing frigates, and that the age of steam and electricity, of enormous ironclads and rapid cruisers, affords as great a scope for individual daring, resource, and heroism as the days of sailing frigates and boarding parties; and that though in recent years our sailors have not had many chances of using their weapons on the sea, the Naval Brigade has taken its part in many an expedition, on land, and on all occasions the British tar has proved himself a worthy successor to the heroes of Trafalgar and the Nile.

During the earlier years of the Great Queen’s reign her sailors had little to do in the fighting line, though on the West Coast of Africa the slave traffic gave occasion to many a lively skirmish, and on other seas various events from time to time afforded an opportunity for showing that their weapons were as effective as of old.

The capture of Aden.

Somewhat of that character was the capture of Aden, an Arab town on the entrance of the Red Sea. A former sultan or chief of Aden had by treaty given up the place to the British; but his successor, not approving of the bargain, refused to submit to it. As it was important for the English to hold the place, to facilitate the navigation of the Red Sea, an expedition, under Captain Smith of the Volage, was sent by Sir Frederick Maitland, then Commander-in-Chief on the East India Station, to bring the Sultan to reason.

It was not a big affair, though unhappily it cost several lives, but its result was important and lasting. Captain Smith’s expedition comprised, besides HMS Volage, three smaller vessels and some transports. On the 19th of January 1839 he bombarded the town and landed his troops, who after a short resistance overcame the Sultan’s army, and hoisted the flag on its walls, and Aden became a port of the British Empire, as it has remained ever since.

From early times it had been a very important centre for the trade between Europe and the East, but when the Portuguese opened up the route to India by the Cape it lost its advantage. In the hands of the British its prosperity has returned, and the return of the Eastern trade by means of the Suez Canal to the Red Sea has raised it to a far higher position than ever it possessed in ancient days; it is now the great coaling station for the British fleet and merchantmen in the East. The trade passing through it to and from Southern Arabia exceeds five millions a year, and it is also a strongly fortified naval station.