Our Homeland Churches and How to Study Them 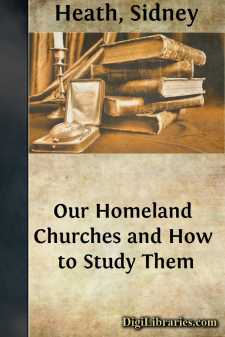 However much we may admire, considered purely as art, the Pagan temples of the Greeks and Romans, we must confess that they are lacking in those high ideals and those sustained and inspired motives which seem to penetrate and permeate the buildings and churches of the Christian era. Perfect as is Greek art within its somewhat narrow limits, it is, nevertheless, cold, precise and lifeless. The Gothic buildings on the contrary are pregnant with the very spirit of life.

Prompted by a deep and fervent faith in their religion, the Gothic builders and sculptors unconsciously wove into the humblest of their architectural enrichments some portion of their daily life and personality. The slave-built temples of the Greeks offered no scope for the exercise of individual expression—such, in fact, would have been strongly resented—whereas the early Christian craftsman, revelling in his freedom, seized every opportunity of expressing in his work his joy, fear and hope of immortality.

This is made apparent in the study of an old church, whereof every portion—door, window, bench-end, carving, gargoyle—has hidden about it some suggestion of beautiful thought, or some distinct and appropriate symbolism. The fact that symbolism underlies almost every such indication of mediæval thought is made abundantly manifest in the study of mediæval literature. Open any 12th century treatise on morals, science or history, and you become aware of the fact at once.

The main-spring of this symbolism, of all Christian symbolism, turns on the parabolic meaning in the scheme of Creation. The early writers were far less concerned with recording the plain objective facts of history, than in pursuing the allegory and the love of the marvellous, and showing all those characteristics of what we now term an unscientific attitude of mind.

In its widest sense, symbolism means the expression of belief, and if we would interpret history aright, we must grasp the fact that the key to the character and disposition of peoples of all ages lies in the knowledge of their beliefs; for out of the beliefs of one age most surely grow the beliefs of its successors, and in no work of man's hand are the beliefs held by various peoples in past ages more clearly defined than in our cathedrals and churches, which noble buildings in every civilized country indicate principles as well as facts, influences as well as results; and while presenting the finest materials for æsthetic study, are no less useful as indicating the psychological peculiarities of those builders of old to whose condition they bear witness.

In our grand specimens of ecclesiastical architecture, we may read the world's later history, and to-day they breathe the sombre reverential influence of a faith which sought to satisfy itself with the visible symbolizing of those half-poetical, half-superstitious conceptions with which the religion of the Middle Ages was so deeply imbued.

An early development of decorative symbolic art, known as Celtic, of which we have examples on old Irish crosses, and particularly on illuminated MSS. was wrought by the Christian monks of the 7th and 8th centuries, but what is generally understood as Christian symbolic art had its finest development about the 13th century. Gothic art is essentially symbolic and in many instances, its individual forms have specific significance. Thus the common equilateral triangle was used to symbolize the Holy Trinity, as are the two entwined triangles. Other symbols employed at this period setting forth the mystery of the Unity of the Trinity, without beginning and without end, are three interlaced circles, and a very curious one is that in which three faces are so combined as to form an ornamental figure. Baptism under the immediate sanction of the Divine Trinity was represented by three fishes placed together in the form of a triangle.

Plan of a Typical Gothic Cruciform Parish Church.(St. Mary, Luton, fully described in No. 47 of this Series).Drawn by Ed. Craven Lee. Click to ENLARGE

So numerous, indeed were such Christian symbols after the 9th century that a mere enumeration of them would occupy considerable space....