Our Holidays Their Meaning and Spirit; retold from St. Nicholas 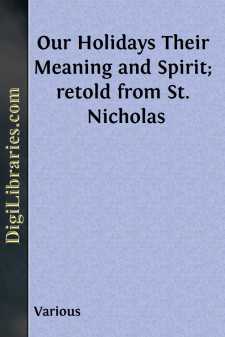 Our Holidays If all the year were playing holidays,To sport would be as tedious as to work. Shakspere. King Henry IV, Part I. ST. SATURDAY

Oh, Friday night's the queen of nights, because it ushers inThe Feast of good St. Saturday, when studying is a sin,When studying is a sin, boys, and we may go to playNot only in the afternoon, but all the livelong day.St. Saturday—so legends say—lived in the ages whenThe use of leisure still was known and current among men;Full seldom and full slow he toiled, and even as he wroughtHe'd sit him down and rest awhile, immersed in pious thought.He loved to fold his good old arms, to cross his good old knees,And in a famous elbow-chair for hours he'd take his ease;He had a word for old and young, and when the village boysCame out to play, he'd smile on them and never mind the noise.So when his time came, honest man, the neighbors all declaredThat one of keener intellect could better have been spared;By young and old his loss was mourned in cottage and in hall,For if he'd done them little good, he'd done no harm at all.In time they made a saint of him, and issued a decree—Since he had loved his ease so well, and been so glad to seeThe children frolic round him and to smile upon their play—That school boys for his sake should have a weekly holiday.They gave his name unto the day, that as the years roll byHis memory might still be green; and that's the reason whyWe speak his name with gratitude, and oftener by farThan that of any other saint in all the calendar.Then, lads and lassies, great and small, give ear to what I say—Refrain from work on Saturdays as strictly as you may;So shall the saint your patron be and prosper all you do—And when examinations come he'll see you safely through.   Hallowe'en

The Eve of All Saints' Day

This night is known in some places as Nutcrack Night, or Snapapple Night. Supernatural influences are pretended to prevail and hence all kinds of superstitions were formerly connected with it. It is now usually celebrated by children's parties, when certain special games are played.

As the world grows old and wise, it ceases to believe in many of its superstitions. But, although they are no longer believed in, the customs connected with them do not always die out; they often linger on through centuries, and, from having once been serious religious rites, or something real in the life of the people, they become at last mere children's plays or empty usages, often most zealously enjoyed by those who do not understand their meaning.

All-hallow Eve is now, in our country towns, a time of careless frolic, and of great bonfires, which, I hear, are still kindled on the hill-tops in some places. We also find these fires in England, Scotland, and Ireland, and from their history we learn the meaning of our celebration. Some of you may know that the early inhabitants of Great Britain, Ireland, and parts of France were known as Celts, and that their religion was directed by strange priests called Druids....