Our Friend the Dog 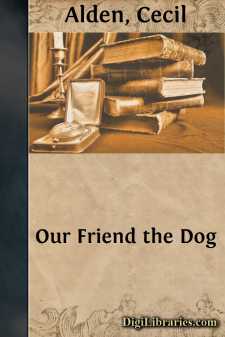 OUR FRIEND THE DOG I

I have lost, within these last few days, a little bull-dog. He had just completed the sixth month of his brief existence. He had no history. His intelligent eyes opened to look out upon the world, to love mankind, then closed again on the cruel secrets of death.

The friend who presented me with him had given him, perhaps by antiphrasis, the startling name of Pelléas. Why rechristen him? For how can a poor dog, loving, devoted, faithful, disgrace the name of a man or an imaginary hero?

Pelléas had a great bulging, powerful forehead, like that of Socrates or Verlaine; and, under a little black nose, blunt as a churlish assent, a pair of large hanging and symmetrical chops, which made his head a sort of massive, obstinate, pensive and three-cornered menace. He was beautiful after the manner of a beautiful, natural monster that has complied strictly with the laws of its species. And what a smile of attentive obligingness, of incorruptible innocence, of affectionate submission, of boundless gratitude and total self-abandonment lit up, at the least caress, that adorable mask of ugliness! Whence exactly did that smile emanate? From the ingenuous and melting eyes? From the ears pricked up to catch the words of man? From the forehead that unwrinkled to appreciate and love, or from the stump of a tail that wriggled at the other end to testify to the intimate and impassioned joy that filled his small being, happy once more to encounter the hand or the glance of the god to whom he surrendered himself?

Pelléas was born in Paris, and I had taken him to the country. His bonny fat paws, shapeless and not yet stiffened, carried slackly through the unexplored pathways of his new existence his huge and serious head, flat-nosed and, as it were, rendered heavy with thought.

For this thankless and rather sad head, like that of an overworked child, was beginning the overwhelming work that oppresses every brain at the start of life. He had, in less than five or six weeks, to get into his mind, taking shape within it, an image and a satisfactory conception of the universe. Man, aided by all the knowledge of his own elders and his brothers, takes thirty or forty years to outline that conception, but the humble dog has to unravel it for himself in a few days: and yet, in the eyes of a god, who should know all things, would it not have the same weight and the same value as our own?

It was a question, then, of studying the ground, which can be scratched and dug up and which sometimes reveals surprising things; of casting at the sky, which is uninteresting, for there is nothing there to eat, one glance that does away with it for good and all; of discovering the grass, the admirable and green grass, the springy and cool grass, a field for races and sports, a friendly and boundless bed, in which lies hidden the good and wholesome couch-grass. It was a question, also, of taking promiscuously a thousand urgent and curious observations. It was necessary, for instance, with no other guide than pain, to learn to calculate the height of objects from the top of which you can jump into space; to convince yourself that it is vain to pursue birds who fly away and that you are unable to clamber up trees after the cats who defy you there; to distinguish between the sunny spots where it is delicious to sleep and the patches of shade in which you shiver; to remark with stupefaction that the rain does not fall inside the houses, that water is cold, uninhabitable and dangerous, while fire is beneficent at a distance, but terrible when you come too near; to observe that the meadows, the farm-yards and sometimes the roads are haunted by giant creatures with threatening horns, creatures good-natured, perhaps, and, at any rate, silent, creatures who allow you to sniff at them a little curiously without taking offence, but who keep their real thoughts to themselves....