Our Frank and other stories 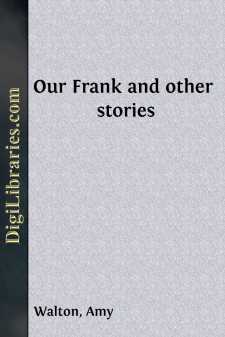 It was a mild spring evening, and Mrs Frank Darvell was toiling slowly up Whiteleaf Hill on her way back from market. She had walked every step of the way there to sell her ducklings, and now the basket on her arm was heavy with the weight of various small grocery packets. Up till now she had not felt so tired, partly because she had been walking along the level high-road, and partly because the way had been beguiled by the chat of a friend; but after she had said good-night to her crony at the beginning of the village, and turned up the steep chalky road which led to the hills, her fatigue increased with every step, and the basket seemed heavier than ever. It was a very lonely mile she had to go before reaching home; up and up wound the rough white road, and then gave a sudden turn and ran along level a little while with dark woods on either side. Then up again, steeper than ever, till you reached the top of the hill, and on one side saw the plain beneath, dotted over with villages and church spires, and on the other hand wide sloping beech woods, which were just now delicately green with their young spring leaves.

Mrs Darvell set her basket down on the ground when she reached this point, and drew a long breath; the worst of the walk was over now, and she thought with relief how good it would be to pull off her boots, and hoped that Frank had not forgotten to have the kettle on for tea. She presently trudged on again with renewed spirits, and in ten minutes more the faint blue smoke from a chimney caught her eye; that was neighbour Gunn’s cottage, and their own was close by. “And right thankful I be,” said Mrs Darvell to herself as she unlatched the little garden gate.

The cottage was one of a small lonely cluster standing on the edge of an enormous beech wood. Not so very long ago the wood had covered the whole place; but gradually a clearing had been made, the ground cultivated, and a little settlement had sprung up, which was known as “Green Highlands.” It belonged to the parish of Danecross, a village in the plain below, three good miles away; so that for church, school, and public-house the people had to descend the long hill up which Mrs Darvell had just struggled. Shops there were none, even in Danecross, and for these they had to go a mile further, to the market-town of Daylesbury. But all this was not such a hardship to the people of Green Highlands as might be supposed, and many of them would not have changed their cottage on the hill for one in the village on the plain; for the air of Green Highlands was good, the children “fierce,” which in those parts means healthy and strong, and everyone possessed a piece of garden big enough to grow vegetables and accommodate a family pig.

So the people, though poor, were contented, and had a more prosperous well-to-do air than some of the Danecross folk, who received higher wages and lived in the valley.

The room Mrs Frank Darvell entered with a heavy, tired tread was a good-sized kitchen, one end of which was entirely occupied by a huge open fireplace without any grate; on the hearth burned and crackled a bright little wood-fire, the flames of which played merrily round a big black kettle hung on a chain....