Our Fathers Have Told Us Part I. The Bible of Amiens 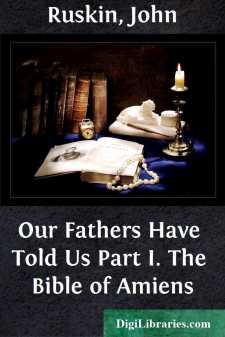 The long abandoned purpose, of which the following pages begin some attempt at fulfilment, has been resumed at the request of a young English governess, that I would write some pieces of history which her pupils could gather some good out of;—the fruit of historical documents placed by modern educational systems at her disposal, being to them labour only, and sorrow.

What else may be said for the book, if it ever become one, it must say for itself: preface, more than this, I do not care to write: and the less, because some passages of British history, at this hour under record, call for instant, though brief, comment.

I am told that the Queen's Guards have gone to Ireland; playing "God save the Queen." And being, (as I have declared myself in the course of some letters to which public attention has been lately more than enough directed,) to the best of my knowledge, the staunchest Conservative in England, I am disposed gravely to question the propriety of the mission of the Queen's Guards on the employment commanded them. My own Conservative notion of the function of the Guards is that they should guard the Queen's throne and life, when threatened either by domestic or foreign enemy: but not that they should become a substitute for her inefficient police force, in the execution of her domiciliary laws.

And still less so, if the domiciliary laws which they are sent to execute, playing "God save the Queen," be perchance precisely contrary to that God the Saviour's law; and therefore,[Pg iv] such as, in the long run, no quantity either of Queens, or Queen's men, could execute. Which is a question I have for these ten years been endeavouring to get the British public to consider—vainly enough hitherto; and will not at present add to my own many words on the matter. But a book has just been published by a British officer, who, if he had not been otherwise and more actively employed, could not only have written all my books about landscape and picture, but is very singularly also of one mind with me, (God knows of how few Englishmen I can now say so,) on matters regarding the Queen's safety, and the Nation's honour. Of whose book ("Far out: Rovings retold"), since various passages will be given in my subsequent terminal notes, I will content myself with quoting for the end of my Preface, the memorable words which Colonel Butler himself quotes, as spoken to the British Parliament by its last Conservative leader, a British officer who had also served with honour and success.

The Duke of Wellington said: "It is already well known to your Lordships that of the troops which our gracious Sovereign did me the honour to entrust to my command at various periods during the war—a war undertaken for the express purpose of securing the happy institutions and independence of the country—at least one half were Roman Catholics. My Lords, when I call your recollection to this fact, I am sure all further eulogy is unnecessary. Your Lordships are well aware for what length of period and under what difficult circumstances they maintained the Empire buoyant upon the flood which overwhelmed the thrones and wrecked the institutions of every other people;—how they kept alive the only spark of freedom which was left unextinguished in Europe.......