Our Deportment Or the Manners, Conduct and Dress of the Most Refined Society 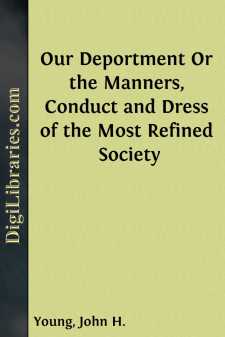 CHAPTER I. Introductory. "Ingenious Art with her expressive face, Steps forth to fashion and refine the race."—Cowper.     KNOWLEDGE of etiquette has been defined to be a knowledge of the rules of society at its best. These rules have been the outgrowth of centuries of civilization, had their foundation in friendship and love of man for his fellow man—the vital principles of Christianity—and are most powerful agents for promoting peace, harmony and good will among all people who are enjoying the blessings of more advanced civilized government. In all civilized countries the influence of the best society is of great importance to the welfare and prosperity of the nation, but in no country is the good influence of the most refined society more powerfully felt than in our own, "the land of the future, where mankind may plant, essay, and resolve all social problems." These rules make social intercourse more agreeable, and facilitate hospitalities, when all members of society hold them as binding rules and faithfully regard their observance. They are to society what our laws are to the people as a political body, and to disregard them will give rise to constant misunderstandings, engender ill-will, and beget bad morals and bad manners.

Says an eminent English writer: "On manners, refinement, rules of good breeding, and even the forms of etiquette, we are forever talking, judging our neighbors severely by the breach of traditionary and unwritten laws, and choosing our society and even our friends by the touchstone of courtesy." The Marchioness de Lambert expressed opinions which will be endorsed by the best bred people everywhere when she wrote to her son: "Nothing is more shameful than a voluntary rudeness. Men have found it necessary as well as agreeable to unite for the common good; they have made laws to restrain the wicked; they have agreed among themselves as to the duties of society, and have annexed an honorable character to the practice of those duties. He is the honest man who observes them with the most exactness, and the instances of them multiply in proportion to the degree of nicety of a person's honor."

Originally a gentleman was defined to be one who, without any title of nobility, wore a coat of arms. And the descendants of many of the early colonists preserve with much pride and care the old armorial bearings which their ancestors brought with them from their homes in the mother country. Although despising titles and ignoring the rights of kings, they still clung to the "grand old name of gentleman." But race is no longer the only requisite for a gentleman, nor will race united with learning and wealth make a man a gentleman, unless there are present the kind and gentle qualities of the heart, which find expression in the principles of the Golden Rule. Nor will race, education and wealth combined make a woman a true lady if she shows a want of refinement and consideration of the feelings of others.

Good manners are only acquired by education and observation, followed up by habitual practice at home and in society, and good manners reveal to us the lady and the gentleman....