Our Common Insects A Popular Account of the Insects of Our Fields, Forests, Gardens and Houses

by A. S. (Alpheus Spring) Packard 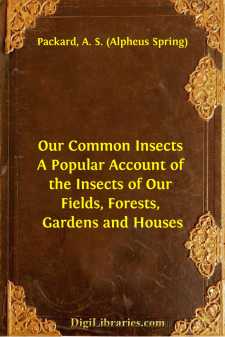 This little volume mainly consists of a reprint of a series of essays which appeared in the "American Naturalist" (Vols. i-v, 1867-71). It is hoped that their perusal may lead to a better acquaintance with the habits and forms of our more common insects. The introduction was written expressly for this book, as well as Chapter XIII, "Hints on the Ancestry of Insects." The scientific reader may be drawn with greater interest to this chapter than to any other portion of the book. In this discussion of a perhaps abstruse and difficult theme, his indulgence is sought for whatever imperfections or deficiencies may appear. Our systems of classification may at least be tested by the application of the theory of evolution. The natural system, if we mistake not, is the genealogy of organized forms; when we can trace the latter, we establish the former. Considering how much naturalists differ in their views as to what is a natural classification, it is not strange that a genealogy of animals or plants seems absurd to many. To another generation of naturalists it must, perhaps, be left to decide whether to attempt the one is more unphilosophical than to attempt the other.

Most of the cuts have already appeared in the "Guide to the Study of Insects" and the "American Naturalist," where their original sources are given, while a few have been kindly contributed by Prof. A. E. Verrill, the Boston Society of Natural History, and Prof. C. V. Riley, and three are original.

What is an Insect? When we remember that the insects alone comprise four-fifths of the animal kingdom, and that there are upwards of 200,000 living species, it would seem a hopeless task to define what an insect is. But a common plan pervades the structure of them all. The bodies of all insects consist of a succession of rings, or segments, more or less hardened by the deposition of a chemical substance called chitine; these rings are arranged in three groups: the head, the thorax, or middle body, and the abdomen or hind body. In the six-footed insects, such as the bee, moth, beetle or dragon fly, four of these rings unite early in embryonic life to form the head; the thorax consists of three, as may be readily seen on slight examination, and the abdomen is composed either of ten or eleven rings. The body, then, seems divided or insected into three regions, whence the name insect.

The head is furnished with a pair of antennæ, a pair of jaws (mandibles), and two pairs of maxillæ, the second and basal pair being united at their base to form the so-called labium, or under lip. These four pairs of appendages represent the four rings of the head, to which they are appended in the order stated above.

A pair of legs is appended to each of the three rings of the thorax; while the first and second rings each usually carry a pair of wings.

The abdomen contains the ovipositor; sometimes, as in the bees and wasps, forming a sting. In the spiders (Fig. 1), however, there are no antennæ, and the second maxillæ, or labium, is wanting. Moreover, there are four pairs of legs. The centipedes (Fig. 2, a Myriopod) also differ from the rest of the insects in having an indefinite number of abdominal rings, each bearing a pair of legs.

On examining the arrangement of the parts within, we find the nervous cord, consisting of two chains of swellings, or nerve-knots, resting upon the floor or under side of the body; and the heart, or dorsal vessel, situated just under the skin of the back; and in looking at living caterpillars, such as the cut-worm, and many thin-skinned aquatic larvæ, we can see this long tubular heart pulsating about as often as our own heart, and when the insect is held against its will, or is agitated, the rapidity of the pulsations increases just as with us.

Insects do not breathe as in the higher animals by taking the air into the mouth and filling the lungs, but there are a series of holes or pores along the side of the body, as seen in the grub of the humble bee, through which the air enters and is conveyed to every part of the body by an immense number of air tubes....