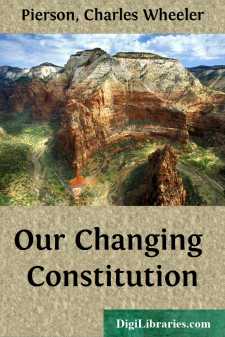 I THE SALIENT FEATURE OF THE CONSTITUTION

Few documents known to history have received as much praise as the United States Constitution. Gladstone called it "the most wonderful work ever struck off at a given time by the brain and purpose of man." The casual reader of the Constitution will be at a loss to account for such adulation. It will seem to him a businesslike document, outlining a scheme of government in terse and well-chosen phrases, but he is apt to look in vain for any earmarks of special inspiration. To understand the true greatness of the instrument something more is required than a mere reading of its provisions.

The Constitution was the work of a convention of delegates from the states, who met in Philadelphia in May, 1787, and labored together for nearly four months. They included a large part of the best character and intellect of the country. George Washington presided over their deliberations. The delegates had not been called together for the purpose of organizing a new government. Their instructions were limited to revising and proposing improvements in the Articles of the existing Confederation, whose inefficiency and weakness, now that the cohesive power of common danger in the war of the Revolution was gone, had become a byword. This task, however, was decided to be hopeless, and with great boldness the convention proceeded to disregard instructions and prepare a wholly new Constitution constructed on a plan radically different from that of the Articles of Confederation. The contents of the Constitution, as finally drafted and submitted for ratification, may be described in few words. It created a legislative department consisting of a Senate and a House of Representatives, an executive department headed by a President, and a judicial department headed by a Supreme Court, and prescribed in general terms the qualifications, powers, and functions of each. It provided for the admission of new states into the Union and that the United States should guarantee to every state a republican form of government. It declared that the Constitution and the laws of the United States made in pursuance thereof, and treaties, should be the supreme law of the land. It provided a method for its own amendment. Save for a few other brief clauses, that was all. There was no proclamation of Democracy; no trumpet blast about the rights of man such as had sounded in the Declaration of Independence. On the contrary, the instrument expressly recognized human slavery, though in discreet and euphemistic phrases.

Wherein, then, did the novelty and greatness of the Constitution lie? Its novelty lay in the duality of the form of government which it created—a nation dealing directly with its citizens and yet composed of sovereign states—and in its system of checks and balances. The world had seen confederations of states. It was familiar with nations subdivided into provinces or other administrative units. It had known experiments in pure democracy. The constitutional scheme was none of these....