Other Worlds Their Nature, Possibilities and Habitability in the Light of the Latest Discoveries 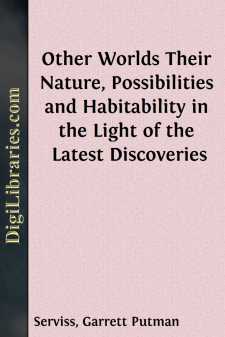 Other worlds and their inhabitants are remarkably popular subjects of speculation at the present time. Every day we hear people asking one another if it is true that we shall soon be able to communicate with some of the far-off globes, such as Mars, that circle in company with our earth about the sun. One of the masters of practical electrical science in our time has suggested that the principle of wireless telegraphy may be extended to the transmission of messages across space from planet to planet. The existence of intelligent inhabitants in some of the other planets has become, with many, a matter of conviction, and for everybody it presents a question of fascinating interest, which has deeply stirred the popular imagination.

The importance of this subject as an intellectual phenomenon of the opening century is clearly indicated by the extent to which it has entered into recent literature. Poets feel its inspiration, and novelists and romancers freely select other planets as the scenes of their stories. One tells us of a visit paid by men to the moon, and of the wonderful things seen, and adventures had, there. Lucian, it is true, did the same thing eighteen hundred years ago, but he had not the aid of hints from modern science to guide his speculations and lend verisimilitude to his narrative.

Another startles us from our sense of planetary security with a realistic account of the invasion of the earth by the terrible sons of warlike Mars, seeking to extend their empire by the conquest of foreign globes.

Sometimes it is a trip from world to world, a kind of celestial pleasure yachting, with depictions of creatures more wonderful than—

"The anthropophagi and men whose headsDo grow beneath their shoulders"—

that is presented to our imagination; and sometimes we are informed of the visions beheld by the temporarily disembodied spirits of trance mediums, or other modern thaumaturgists, flitting about among the planets.

Then, to vary the theme, we find charming inhabitants of other worlds represented as coming down to the earth and sojourning for a time on our dull planet, to the delight of susceptible successors of father Adam, who become, henceforth, ready to follow their captivating visitors to the ends of the universe.

In short, writers of fiction have already established interplanetary communication to their entire satisfaction, thus vastly and indefinitely enlarging the bounds of romance, and making us so familiar with the peculiarities of our remarkable brothers and sisters of Mars, Venus, and the moon, that we can not help feeling, notwithstanding the many divergences in the descriptions, that we should certainly recognize them on sight wherever we might meet them.

But the subject is by no means abandoned to the tellers of tales and the dreamers of dreams. Men of science, also, eagerly enter into the discussion of the possibilities of other worlds, and become warm over it.

Around Mars, in particular, a lively war of opinions rages. Not all astronomers have joined in the dispute—some have not imagination enough, and some are waiting for more light before choosing sides—but those who have entered the arena are divided between two opposed camps. One side holds that Mars is not only a world capable of having inhabitants, but that it actually has them, and that they have given visual proof of their existence and their intelligence through the changes they have produced upon its surface. The other side maintains that Mars is neither inhabited nor habitable, and that what are taken for vast public works and engineering marvels wrought by its industrious inhabitants, are nothing but illusions of the telescope, or delusions of the observer's mind....