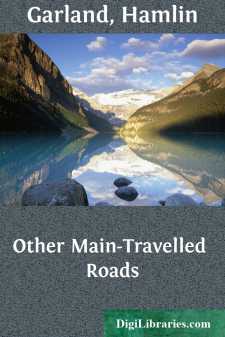 The yellow March sun lay powerfully on the bare Iowa prairie, where the ploughed fields were already turning warm and brown, and only here and there in a corner or on the north side of the fence did the sullen drifts remain, and they were so dark and low that they hardly appeared to break the mellow brown of the fields.

There passed also an occasional flock of geese, cheerful harbingers of spring, and the prairie-chickens had set up their morning symphony, wide-swelling, wonderful with its prophecy of the new birth of grass and grain and the springing life of all breathing things. The crow passed now and then, uttering his resonant croak, but the crane had not yet sent forth his bugle note.

Lyman Gilman rested on his axe-helve at the woodpile of Farmer Bacon to listen to the music around him. In a vague way he was powerfully moved by it. He heard the hens singing their weird, raucous, monotonous song, and saw them burrowing in the dry chip-dust near him. He saw the young colts and cattle frisking in the sunny space around the straw-stacks, absorbed through his bare arms and uncovered head the heat of the sun, and felt the soft wooing of the air so deeply that he broke into an unwonted exclamation:—

"Glory! we'll be seeding by Friday, sure."

This short and disappointing soliloquy was, after all, an expression of deep emotion. To the Western farmer the very word "seeding" is a poem. And these few words, coming from Lyman Gilman, meant more and expressed more than many a large and ambitious springtime song.

But the glory of all the slumbrous landscape, the stately beauty of the sky with its masses of fleecy vapor, were swept away by the sound of a girl's voice humming, "Come to the Saviour," while she bustled about the kitchen near by. The windows were open. Ah! what suggestion to these dwellers in a rigorous climate was in the first unsealing of the windows! How sweet it was to the pale and weary women after their long imprisonment!

As Lyman sat down on his maple log to hear better, a plump face appeared at the window, and a clear, girl-voice said:—

He snuffed the air. "Cookies, by the great horn spoons!" he yelled, leaping up. "Bring me some, an' see me eat; it'll do ye good."

"Come an' get 'm," laughed the face at the window.

"Oh, it's nicer out here, Merry Etty. What's the rush? Bring me out some, an' set down on this log."

With a nod Marietta disappeared, and soon came out with a plate of cookies in one hand and a cup of milk in the other.

Lime, taking the cue, collapsed in a heap, and said feebly, "Bread, bread!"

He brushed off the log and motioned her to sit down beside him, but she hesitated a little and colored a little.

"Oh, Lime, s'pose somebody should see us?"

"Let 'em. What in thunder do we care? Sit down an' gimme a holt o' them cakes. I'm just about done up. I couldn't 'a' stood it another minute."

She sat down beside him with a laugh and a pretty blush....