Orthography As Outlined in the State Course of Study for Illinois 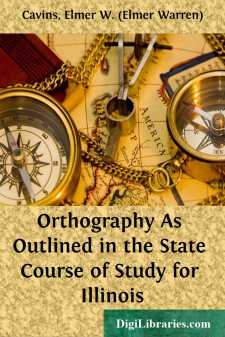 I have long thought that the careful, discriminating study of words is much neglected in our schools. And I am glad to approve, and help to forward, anything that will promote such a study.

Not only will such a study improve a person's language greatly, but it will, at the same time, do much to improve the clearness and precision of his thinking; thought and language have a reciprocal effect.

If a child, while young, can be made to be interested in words themselves,—their origin, their exact meaning, their relations to each other and some of the changes in their meaning which result from their use,—he will be likely to retain that interest through life; it will be more likely to increase than to diminish.

It seems often to be assumed that a student can do nothing profitably with the study of words made up from Greek and Latin roots till he has acquired some mastery of those languages. But I know from experience and much observation that this is not true. Why should it be? Must one master Greek and Latin before he can understand that, in English words, graph means write; ge means earth; phone means sound; cur means run; fin means limit; port means carry, etc.?

And then having learned the meaning of the prefixes and suffixes, is it preposterous to train him to know the etymological significance of a few hundred words by showing him how they are built up?

Of course, we know that many words in common use have shades of meaning quite different from, and in some cases almost opposite to, their literal significance. But will not the student be better able to understand these derived meanings by knowing their literal significance than in any other way? At any rate, I am fully persuaded that such a study of words as this book proposes can be made very profitable to those pupils for whose use it is prepared.

The teacher will find, however, that the teaching of this subject will require much careful labor on his part. The mere learning of the meaning of prefixes and suffixes and of the roots themselves, with the brief remarks on the meaning of some of the words, will need to be supplemented by a careful mastery of it all on his part. And to this must be added much thought of his own, together with careful research in the great dictionaries. But to the earnest and intelligent teacher, such thought and research will yield very rich fruit in his own thinking, and in his use of English speech.

I cheerfully commend the book as a move in the right direction; and as adapted, in my opinion, to do much to supply a serious lack in the present work of the schools.

1. From the lists given in this book omit such words as in your opinion are beyond the vocabulary of your pupils.

2. All words given for the first month's work are either defined or illustrated below the lists. This is done to help make clear the method of showing their literal significance. Further along in each year's work only the most difficult words are explained....