Original sonnets on various subjects; and odes paraphrased from Horace 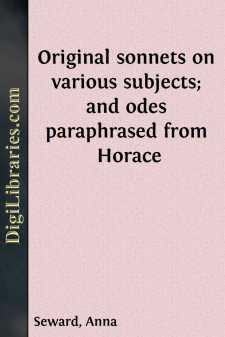 Whatever other excellence may be wanting in the ensuing Poems, they are, with only nine exceptions out of the hundred, strictly Sonnets. Those nine vary only from the rules of the legitimate Sonnet in that they rhime three, instead of four times in the first part. The pause is in them, as in the rest, variously placed through the course of the verses; and thus they bear no more resemblance than their associates, to those minute Elegies of twelve alternate rhimes, closing with a couplet, which assume the name of Sonnet, without any other resemblance to that order of Verse, except their limitation to fourteen lines. I never found the quadruple rhimes injurious to the general expression of the sense, but in the excepted instances. When it is considered how few they are in so large a number, I flatter myself the idea will vanish that our language is not capable of doing justice to the regular Sonnet.

From the Supplement to the Gentleman's Magazine for 1786, I shall insert Mr. White's definition of the nature and perfection of this species of Verse, because I think it explains them with justness and precision.

“Little Elegies, consisting of four stanzas and a couplet, are no more Sonnets than they are Epic Poems. The Sonnet is of a particular and arbitrary construction; it partakes of the nature of Blank Verse, by the lines running into each other at proper intervals. Each line of the first eight, rhimes four times, and the order in which those rhimes should fall is decisive. For the ensuing six there is more licence; they may, or may not, at pleasure, close with a couplet.

“Of Milton's English Sonnets, only that to Oliver Cromwell ends with a couplet, but the single instance is a sufficient precedent; however, in three out of his five Italian ones, the concluding lines rhime to each other.

“The style of the Sonnet should be nervous, and, where the subject will with propriety bear elevation, sublime; with which, simplicity of language is by no means incompatible. If the subject is familiar and domestic, the style should, though affectionate, be nervous; though plain, be energetic. The great models of perfection, for the sublime and domestic Sonnet, are those of Milton's, ‘To the Soldier to spare his Dwelling-place,’ and ‘To Mr. Laurence.’

“The Sonnet is certainly the most difficult species of poetic composition; but difficulty, well subdued, is excellence. Mrs. Smith says she has been told that the regular Sonnet suits not the nature or genius of our language. Surely this assertion cannot be demonstrated, and therefore was not worth attention.

“Out of eighteen English Sonnets, written by Milton, four are bad. The rest, though they are not free from certain hardnesses, have a pathos and greatness in their simplicity, sufficient to endear the legitimate Sonnet to every Reader of just taste. They possess a characteristic grace, which can never belong to three elegiac stanzas, closing with a couplet.”

I have pleasure in quoting the preceding Dissertation on the Sonnet, conscious that there is no order of Verse, upon which so much erroneous opinion has gone forth, and of whose beauties the merely common Reader is so insensible. But when the Author of this just Treatise says of the assertion, that the legitimate Sonnet suits not our language, “its truth cannot be demonstrated,” he should perhaps rather have observed, that its fallacy is proved by the great number of beautiful legitimate Sonnets, which adorn our National Poetry, not only by Milton, but by many of our modern Poets.

Of the four of Milton's, justly disapproved by Mr. White, there is one evidently a burlesque, written in sport. It begins,

“A book was writ of late, call'd Tetrachordon.”

Doctor Johnson has the disingenuousness, in his Folio Dictionary, under the word Sonnet, to cite that Sonnet at full length, as a specimen of Milton's style in this kind of Poetry. Johnson disliked Sonnets, and he equally disliked Blank Verse, and Odes. It is in vain to combat the prejudice of splenetic aversion....