Opticks or, a Treatise of the Reflections, Refractions, Inflections, and Colours of Light 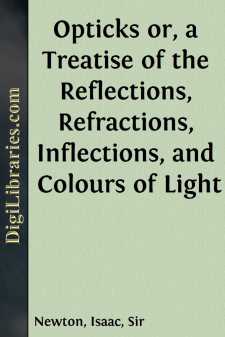 By the Rays of Light I understand its least Parts, and those as well Successive in the same Lines, as Contemporary in several Lines. For it is manifest that Light consists of Parts, both Successive and Contemporary; because in the same place you may stop that which comes one moment, and let pass that which comes presently after; and in the same time you may stop it in any one place, and let it pass in any other. For that part of Light which is stopp'd cannot be the same with that which is let pass. The least Light or part of Light, which may be stopp'd alone without the rest of the Light, or propagated alone, or do or suffer any thing alone, which the rest of the Light doth not or suffers not, I call a Ray of Light.

Refrangibility of the Rays of Light, is their Disposition to be refracted or turned out of their Way in passing out of one transparent Body or Medium into another. And a greater or less Refrangibility of Rays, is their Disposition to be turned more or less out of their Way in like Incidences on the same Medium. Mathematicians usually consider the Rays of Light to be Lines reaching from the luminous Body to the Body illuminated, and the refraction of those Rays to be the bending or breaking of those lines in their passing out of one Medium into another. And thus may Rays and Refractions be considered, if Light be propagated in an instant. But by an Argument taken from the Æquations of the times of the Eclipses of Jupiter's Satellites, it seems that Light is propagated in time, spending in its passage from the Sun to us about seven Minutes of time: And therefore I have chosen to define Rays and Refractions in such general terms as may agree to Light in both cases.

Reflexibility of Rays, is their Disposition to be reflected or turned back into the same Medium from any other Medium upon whose Surface they fall. And Rays are more or less reflexible, which are turned back more or less easily. As if Light pass out of a Glass into Air, and by being inclined more and more to the common Surface of the Glass and Air, begins at length to be totally reflected by that Surface; those sorts of Rays which at like Incidences are reflected most copiously, or by inclining the Rays begin soonest to be totally reflected, are most reflexible.

The Angle of Incidence is that Angle, which the Line described by the incident Ray contains with the Perpendicular to the reflecting or refracting Surface at the Point of Incidence.

The Angle of Reflexion or Refraction, is the Angle which the line described by the reflected or refracted Ray containeth with the Perpendicular to the reflecting or refracting Surface at the Point of Incidence.