Openings in the Old Trail 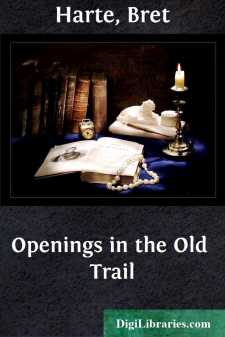 A MERCURY OF THE FOOT-HILLS

It was high hot noon on the Casket Ridge. Its very scant shade was restricted to a few dwarf Scotch firs, and was so perpendicularly cast that Leonidas Boone, seeking shelter from the heat, was obliged to draw himself up under one of them, as if it were an umbrella. Occasionally, with a boy's perversity, he permitted one bared foot to protrude beyond the sharply marked shadow until the burning sun forced him to draw it in again with a thrill of satisfaction. There was no earthly reason why he had not sought the larger shadows of the pine-trees which reared themselves against the Ridge on the slope below him, except that he was a boy, and perhaps even more superstitious and opinionated than most boys. Having got under this tree with infinite care, he had made up his mind that he would not move from it until its line of shade reached and touched a certain stone on the trail near him! WHY he did this he did not know, but he clung to his sublime purpose with the courage and tenacity of a youthful Casabianca. He was cramped, tickled by dust and fir sprays; he was supremely uncomfortable—but he stayed! A woodpecker was monotonously tapping in an adjacent pine, with measured intervals of silence, which he always firmly believed was a certain telegraphy of the bird's own making; a green-and-gold lizard flashed by his foot to stiffen itself suddenly with a rigidity equal to his own. Still HE stirred not. The shadow gradually crept nearer the mystic stone—and touched it. He sprang up, shook himself, and prepared to go about his business. This was simply an errand to the post-office at the cross-roads, scarcely a mile from his father's house. He was already halfway there. He had taken only the better part of one hour for this desultory journey!

However, he now proceeded on his way, diverging only to follow a fresh rabbit-track a few hundred yards, to note that the animal had doubled twice against the wind, and then, naturally, he was obliged to look closely for other tracks to determine its pursuers. He paused also, but only for a moment, to rap thrice on the trunk of the pine where the woodpecker was at work, which he knew would make it cease work for a time—as it did. Having thus renewed his relations with nature, he discovered that one of the letters he was taking to the post-office had slipped in some mysterious way from the bosom of his shirt, where he carried them, past his waist-band into his trouser-leg, and was about to make a casual delivery of itself on the trail. This caused him to take out his letters and count them, when he found one missing. He had been given four letters to post—he had only three. There was a big one in his father's handwriting, two indistinctive ones of his mother's, and a smaller one of his sister's—THAT was gone! Not at all disconcerted, he calmly retraced his steps, following his own tracks minutely, with a grim face and a distinct delight in the process, while looking—perfunctorily—for the letter. In the midst of this slow progress a bright idea struck him....